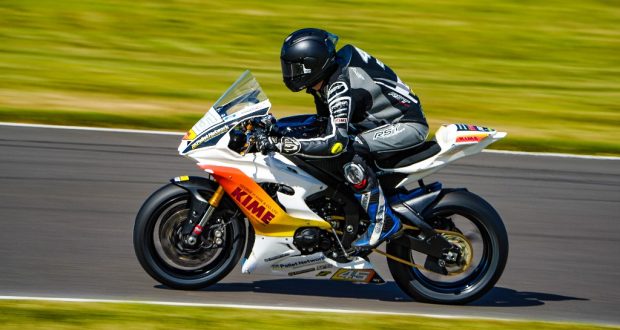 ON THE CHARGE: Kime Racing ace Tom Fisher, pictured in action at Brands Hatch over the weekend. Photo by CAMILLA TEMPLE-COURT

Kime Racing rider Tom Fisher travelled south to Kent for round six of the No Limits Pirelli Super Series 600 championship at Brands Hatch over the weekend and recorded two podium finishes and a sixth place in his three races to retain second place in the overall rider standings.

After qualifying in third position, Fisher – who is also manager for the Wyberton-based Pirelli Superstock championship team G&S Racing Kawasaki – lined up for a front row start to the first race on Saturday which took place on the short Indy circuit.

As the lights went out Fisher slotted into third place in his class but fifth overall in the mixed grid of riders.

He caught and passed Wilfred Turner on lap four to move up into fourth overall and spent the next ten laps pursuing Sam Throw, who he passed on lap 14 of 20.

Fisher then had a clear track ahead which enabled him to catch the two leaders, Finlay Arscott and Tommy Fielding.

The trio then entered into a close and exciting battle for the lead, with just 0.2secs covering the three riders.

But try as he may, Fisher just could not make the pass he required and crossed the finish line for third place.

On Sunday the race action moved onto the full International circuit, with Fisher starting from the middle of the front row and taking up second place on the first lap.

He passed Arscott on lap two to take the lead and was beginning to pull a small gap when the red flag halted the race.

At the restart, which was to be a seven-lap dash to the flag, Fisher was running in fourth place when rain started to fall.

He dropped a couple of places as he slowed to avoid slipping in the wet conditions and the red flag came out once again.

This time a result was declared and Fisher was awarded sixth place.

Having set the fastest lap of the shortened second race Fisher started the final race from pole position.

But James Alderson beat him to the first corner and took up the lead with Fisher in his tyre tracks.

The two leaders made a break at the front and remained within 0.3secs of each other until lap ten of 12 when they encountered some back markers.

Alderson was lucky and passed them without a hitch, but Fisher was held up and lost ground and had to be content with second place just 1.19secs adrift.

Fisher, though, had done enough to retain his second place in the overall rider standings where Arscott holds the lead on 331.5 points, some 37.5 clear of his total of 294.

But, with two rounds and four races remaining, it is still possible for him to make up the deficit.

The next round is at Cadwell Park on the weekend of September 3/4.

Kime Racing is based at Fishtoft, headquarters of transport company George H Kime & Company who have branches throughout the county.