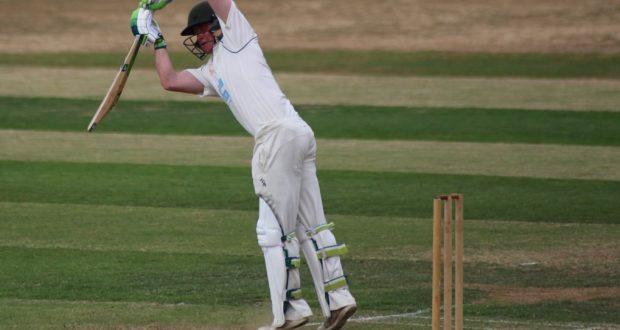 KNOCK: Joe Kendall on his way to 230 not out for Lincs.

Joe Kendall made an incredible 230 not out as Lincolnshire CCC picked up maximum points from their Eastern Division clash at leaders Buckinghamshire.

Lincolnshire travelled to Chesham for what was the third of their three-day fixtures of the season – and gave a debut to Alex Moor.

On a very hot and sunny day, Buckinghamshire won the toss and elected to bat. The visitors quickly made inroads into the home side’s batting order and reduced them to 28-5, with Dan Freeman accounting for three of their wickets.

Buckinghamshire’s scoring rate was extremely slow in the face of fine controlled bowling by Lincolnshire’s attack. The away side continued to force home their early advantage and two further wickets saw the total reach 81-7.

Matt Rance and Cameron Parsons then put together the highest stand of the innings, adding 58 for the eighth wicket before Matt Fowler dismissed the dangerous Rance for 33.

Fowler then removed the remaining Buckinghamshire batsmen as the home side were dismissed for 147 in the 66th over.

Freeman with (4-22) and Matt Fowler (3-10) were Lincolnshire’s most successful bowlers in securing maximum bowling points.

Kendall and Chris Jones opened for Lincolnshire and batted solidly and sensibly – while at the same time maintaining a steady run rate. Both players passed their half centuries and had put on 123 together before Jones was dismissed for 66.

Louis Kimber joined Kendall and they took Lincolnshire into the lead and by the end of day one they were 168-1.

Day two was hot and sunny, but Kendall and Kimber batted on and on to put Lincolnshire in a strong position. Kendall passed his century as did Kimber, as the total passed 300 and then 400.

Kimber was finally out for 137, his maiden century for Lincolnshire in Championship cricket, having added 282 with Kendall for the second wicket.

Bilal Shafayat joined Kendall, who soon passed 200 as the pair added 78 in quick time before Shafayat fell for 28.

By the end of Lincolnshire’s allotted 90 overs, they had reached 486-3, breaking their highest ever championship total of 483-3 (against Bedfordshire at Dunstable in 1999).

Kendall, with 230 not out (33 fours and one six) was just two runs short of Lincolnshire’s highest ever individual score of 232 set at Grantham in 1925 by Raymond Frearson against Cambridgeshire.

Kendall also became only the fifth ever Lincolnshire player to score a double century in championship cricket.

With a first innings lead of 339, Lincolnshire made a sensational start when Buckinghamshire batted again as Alex Willerton reducing the hosts to 4-2.

A fine stand between Alex Woodland and Michael Payne, who added 161 for the third wicket, followed before Willerton struck again having Woodland caught behind for 68.

Willerton then struck for the fourth time in the innings, dismissing Khan for a duck and James Kimber had Pritchard caught behind for four, leaving Lincolnshire requiring five wickets on the final day to secure victory.

Day three saw Michael Payne reach a fine 100 for the home side before debutant Moor trapped him lbw for 125. Matt Fowler then had Matt Rance caught for 29 with the score on 261, 78 runs short of making Lincolnshire bat again.

Cameron Parsons and Tom Hampton then took the attack to the tiring Lincolnshire bowlers, adding 87 for the ninth wicket before Willerton dismissed Hampton for a valiant 48.

Willerton also accounted for last man Burden, leaving Parsons not out on 64 and the final Buckinghamshire total on 375.

Willerton starred for Lincolnshire, taking 7-92 off 28 overs. Lincolnshire needed just 37 for victory and reached this target for the loss of two wickets in mid-afternoon.

Their next three-day is at Grantham on Sunday, when they face Northumberland (11am).