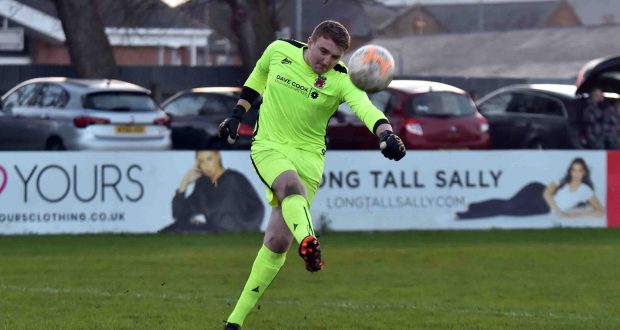 BIG SAVE: Alex Smith earned Pinchbeck what could end up being a big point. Photo by JAKE WHITELEY

Lewis Thorogood hailed Alex Smith’s last-minute penalty save as a “bonus” as Pinchbeck United bid to stave off relegation from the Uhlsport UCL Premier Division North took another twist on Saturday.

Keeper Smith was the hero, though, saving a late penalty to ensure that Pinchbeck at least grabbed a point.

Meanwhile, relegation rivals Selston won 2-1 against Eastwood to leave Thorogood’s side five points from safety with just three games to go in the race for survival at step five of the non-league ladder.

Thorogood admits that a point was a fair result on the day and feels it could prove very handy come the end of the season.

“To be honest I expected Selston to win on Saturday,” said the Pinchbeck chief. “That didn’t surprise me at all.

“I also knew that Quorn would be a very difficult test for us – and so it proved.

“A point was fair at the end of the day, they dominated the first half and we were very fortunate indeed to come in at 1-1. God alone only knows how we came in level.

“But credit to the lads, they stepped up in the second half and we had much the better of the game.

“When it comes to the penalty, it was a very poor decision to award it in my view.

“But Alex pulled off a great save and that’s a massive bonus for us, as that point could prove to be crucial in our bid to get out of the bottom two.

“There’s still three games for us to play and we’re still very much alive in the division.

“It won’t be easy, but we now know exactly what needs to be done if we are to get out of the bottom two – and I have belief that my players can get the points we need.”