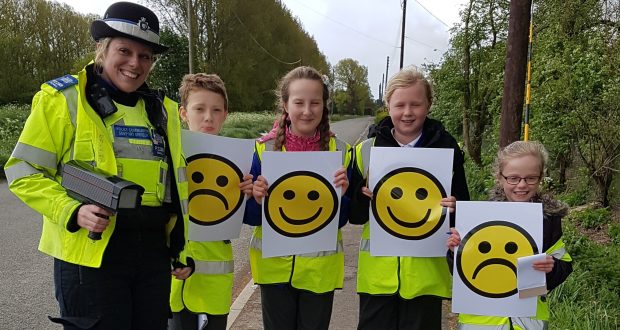 Over the summer holidays, year four pupils from 14 participating local schools completed an application form to register an interest in the scheme.

“The application form was for the children to write a day in the life of their ideal job,” said Naomi. “We had so many fantastic, creative entries, from a firefighter to an astronaut, SAS soldier, RSPCA officer, footballer, police officer and palaeontologist.”

“The successful children were announced in the current JPCSO’s final assemblies before the end of term,” Naomi added.

Now schools are back, the JPCSOs will begin work.

“The new JPCSOs will meet the PCSO who will be working with them and set tasks each month. These include an anti-bullying campaign, a crime prevention walk and a CSI workshop,” said Naomi.

In a recent tweet, Naomi shared a photograph of the JPCSO kit.

“The children are given hi-vis jackets and baseball caps to wear during their tasks, along with a notebook.

“As well as playground patrols and monitoring, they have the extra responsibilities of giving advice and reassurance to other children and reporting any concerns or issues to teachers, staff and PCSOs. In the JPCSOs hi-vis backpacks are small teddies which the JPCSO’s can give to any children that are upset or need reassurance to look after as well as this year having extra reward stickers to hand out.”

Last year’s JPCSOs have been promoted to senior JPCSOs and rewarded for their work, carried out mostly during school time.

“On completion of their year in role they will receive certificates and medals for their hard work and achievement,” Naomi said.