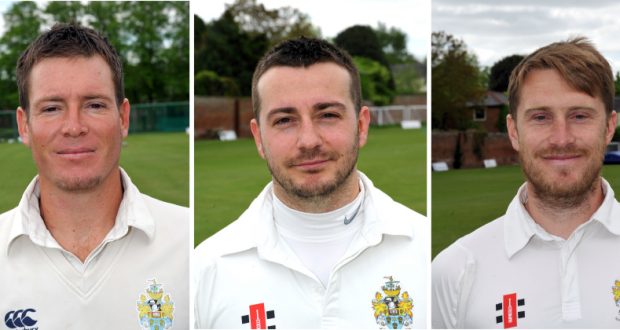 Josh Newton helped himself to a stunning century to steer Spalding Town to an emphatic 80-run win over Louth on Saturday.

A Saturday-best 159 from opener Newton was the mainstay of Town’s 258-5 at Spalding Grammar School, before Roy Tilley took 6-42 to dismiss the rock-bottom visitors for 178.

Having lost their first two Lincs ECB Premier Division games of the season, it’s now back-to-back wins for promoted Spalding – who seem to have rediscovered their touch with the bat.

Buoyed by scoring 270-plus the previous weekend, skipper Rob Ambrose elected to bat after winning the toss at Spalding Grammar School.

Spalding may have lost Faisal Javed for 16 early on, but Newton ensured that one of the top order set a foundation for the innings.

He passed 50 with Luke Hollingworth (35) by his side, before Paul Martin (1-32) removed the all-rounder 15 shy of a half-century of his own.

It was no different here, with Nel reaching 31 before becoming one of Laurence Scott’s (3-60) three victims.

Undeterred, Newton powered on to not only pass his century, but also 150 as Spalding eased past the 250-mark themselves.

With Ben Smith (1) also falling to Scott, Newton finally fell to the same bowler as he was stumped by Richard Bell.

The damage was already done, though, with Town firm favourites with 258-5 on the scoreboard.

If Newton was the hero with the bat, it was veteran Tilley who took the plaudits with the ball.

He accounted for all of the Louth top four, with Scott (15), Wayne Garlick (7), Xander Pitchers (21) and Richard Bell (11) all falling under his spell.

Matt Hamilton (81) offered stubborn resistance, but Tilley continued his stellar spell with the wickets of Martin (0) and Graham West (2).

John Medler (21) did hang around with Hamilton for a while, but he was bowled by Hollingworth (1-19) to end their hopes of an unlikely win.

Young talent Jon Manton eventually had Hamilton caught and bowled, before wrapping up the innings with the wicket of Andy Carrington (3) in the 43rd over with the score on 178.

Town’s second successive 20-point haul leaves them in a healthy mid-table position ahead of Saturday’s trip to the Abbey Lawn to face fifth-placed Bourne (noon).

Having won the toss in the South Lincs and Border League Division Two clash, Town elected to bowl first.

They did manage to bowl Graves Park out for 234 in 44 overs, but the target set by the away side was a pretty formidable one.

Half-centuries from J Morris (66) and J Ashton (54) were the highlights for Graves Park, with both sides picking up maximum bonus points for their efforts.

The reply didn’t start off too well, with Harry Wilkinson-Roberts (2), Hafiz Majeed (2) and Lamming (0) all out cheaply.

That brought Chris Green (16) and 15-year-old Andrews to the crease for what was the best period of Town’s innings.

Andrews belied his years with a 91-ball knock that included 11 fours and two sixes, before falling to Joe Gilbert.

Morris (3-36) also followed up his performance with the bat to help dismiss Town, who lost their lower order very cheaply, in 36 overs.

The youthful Spalding side did at least collect seven points from the clash.

They are fifth in the Division Two standings.

Half-centuries from Jonathan Garner (58) and Brandon Andrews (76) fired hosts Town to 239-7 from their 45 overs on Sunday, before Andrew Dockerill’s 4-41 helped knock the away side over for 150 in reply.