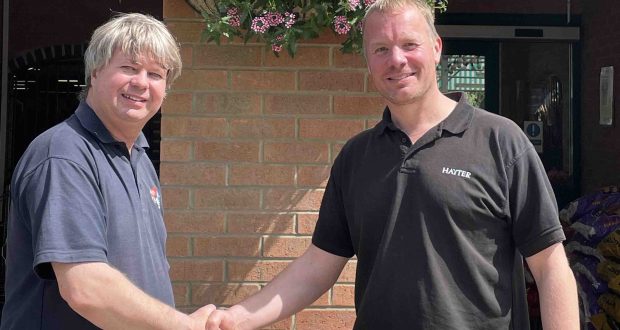 Simon Slinger (left) who is retiring with the new owner of Birchgrove Garden Centre Gary Slator.

A father and son are retiring together after almost 35 years running a popular garden and pet centre.

George and Simon Slinger will leave Birchgrove Garden Centre in Pinchbeck on July 10.

While the pair are looking forward to spending more time with family, Birchgrove, which incorporates Megapets and Bettertack, will be taken over by another local business owner Gary Slator.

Gary (44), who lives in Whaplode, is relocating his Mower Centre business, which sells, repairs and services lawnmowers and garden machinery, to Birchgrove from its previous base at Baytree Nurseries, Weston.

He is looking forward to an exciting future at Birchgrove, where as well as growing the existing business he has big plans to add even more to what’s on offer.

One change already announced is the reopening of Birchgrove’s cafe area by Something Special, which is relocating from smaller premises in Knight Street, Pinchbeck, and will open its doors on Wednesday, July 13.

Gary, who has built a loyal customer base over seven years with The Mower Centre, said: “I am really looking forward to getting stuck in and making Birchgrove even more successful in the future

“We already have plans to hold more outdoor events such as car meets and craft fairs, as well as introducing new concessions inside.

“I have spent the past few weeks getting to know the business and, of course, the fantastic staff and we are all ready to move forward with a renewed energy.”

George, who lives in Spalding with wife Christine, bought Birchgrove with Simon in 1990 from previous owner PA Moerman, who opened the garden centre in 1973.

Despite being in his 80s, George has remained a familiar face at the garden centre and knows many of the regular customers by name.

He said: “It really is the end of an era but the time has come and I would like to say thank you to all my customers who we have served for so many years.

“I wish Gary well in this adventure and hope everyone will support him as well as they have me.”

Simon, who lives in Spalding with wife Helen and daughter Zoe, has spent much of his time – when not behind the scenes running the business – on the shop floor in Megapets and Bettertack.

He said: “Over the years many of the customers who have come into Birchgrove have become friends and George and I have both said that is probably one of the things we will miss most about being here.

“We’d both like to say a huge thank you to everyone who has supported us, including our wonderful staff past and present and customers.

“I look forward to seeing where Gary takes the business next and wish him every success.”

Customers will still be able to see Simon at Megapets for a few weeks as he will be popping in regularly to ensure a smooth handover.

Birchgrove, including the garden centre, Megapets and Bettertack will be closed on Monday and Tuesday, July 11 and 12 for the handover to take place.