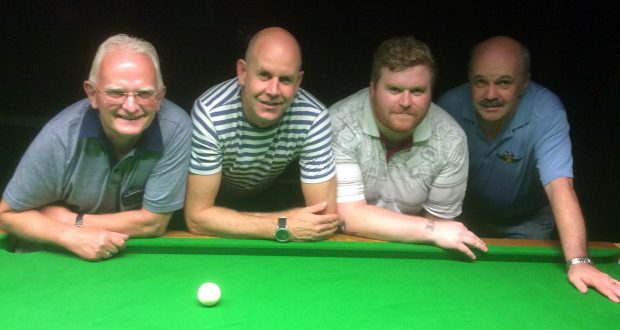 Division One leaders Donington C made it six Spalding and District Snooker League victories in row on Thursday by beating fellow high-fliers Pyramid B 4-2 on their own table.

Wins from Ben Wrigglesworth (O14), Neil Favell (O14) and – crucially – Graham Slater (R14) got Donington over the line in what was a tight tussle on the Bourne baize.

Favell’s success over Dave Pearson (O14) was on the final black, while Slater beat Alfonso Palumbo (O49) 94-80 in a fantastic finale.

However, they are just one point clear at the top following a devastating 6-0 success for second-placed Holbeach A.

Two points further back are Boundary A in third. They dispatched Tulips A 5-1, despite a 27 break from talisman Bren Bowman (O49).

Meanwhile, Services C lost their unbeaten record after a 4-2 loss at Whittlesey A. Gary Thewliss (scr) settled that one in the penultimate frame.

At the foot, Pyramid A grabbed their first win with a 5-1 success at Boundary B.

In Division Two, leaders Long Sutton A suffered their first reverse of the campaign as Pyramid D beat them on their home patch.

Consti G are six points behind them in second after a 4-2 triumph at Whittlesey C.

Andy Blythe’s (O14) 29 break was scant consolation for the host side.

The best break of the week came in Boundary C’s 5-1 win over Gosberton A, with cue ace Paul Spittlehouse (O56) reeling off a fine 49. Team-mate Ash Heywood (scr) added a 32 break en-route to a pair of wins on the night.

Elsewhere, Holbeach B bagged their first victory of the campaign with a stylish 6-0 haul against Consti B, who drop to fourth.

Down in Division Three, Gosberton C extended their flawless start to the season to five matches with a 5-1 home success against Bourne SC B.

Three of the five frames went down to the final black, with David Haresign (R14) and Norman Gookey (R7) grabbing crucial wins for the table-toppers.

Services B are now second after handing Whittlesey B a 6-0 reverse in Spalding.

Also taking maximum points were third-placed Consti A, who won a remarkable clash with Pyramid E. All five frames went to the final black, with Consti taking them all.

Donington B managed a 4-2 win over Services D, with Dave Banister (scr) making a 30 break and team-mate Darren Templeman (R7) adding a cool 21.