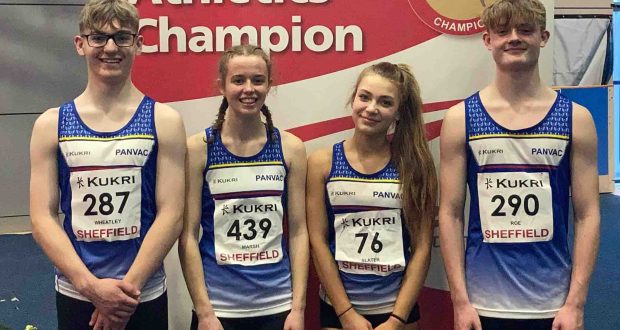 A seven-strong squad of Peterborough and Nene Valley AC youngsters headed to Sheffield at the weekend to compete in the England Indoor Athletics Championship – and a magnificent seven personal best (PB) times were set.

Under-15 athlete Sienna Slater ran a 60m hurdles PB of 8.14secs in her heat, before being eliminated in the semi-final race.

Slater also took part in the 60m hurdles, where she gained her second PB of the weekend.

She clocked 9.38secs in her semi-final, finishing third and missing out on qualification for the final by an agonising 0.08 of a second.

Meanwhile, team-mate Katie Marsh qualified for the semi-final of the under-17 60m hurdles, finishing fifth with a PB time of 9.10secs.

Fellow PNV speedster Max Roe ran an 8.48secs PB in the under-17s 60m hurdles semi-final, before finishing a solid fifth in the final.

Jack Wheatley also bagged a PB when he clocked 8.90secs while finishing sixth in his semi-final.

Elsewhere, a trio of under-20s competed in the 60m hurdles heats, but failed to advance to the later rounds.

Keira Gilman crossed the line in a time of 8.11secs.

Both Gilman and Holly Aslin registered PBs, and the only one of the seven athletes not to, Max Aslin, was only two hundredths of a second outside of setting a new best time.