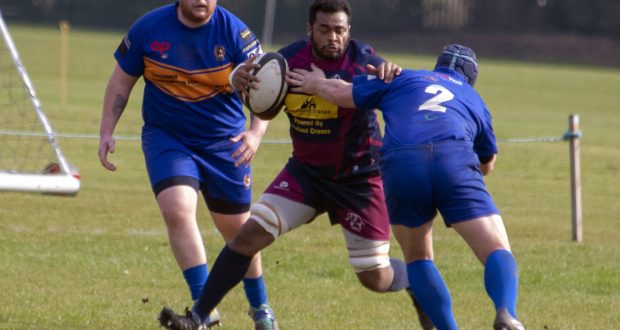 Spalding RFC picked up their first away win of the Midlands Three East (North) season on Saturday as they eased past rock-bottom St Neots 39-7.

Despite falling behind early on, Town followed on from last weekend’s dominant win over Rushden and Higham by bagging a bonus-point triumph that moves them up to seventh in the table.

Fielding a strong team with minimal changes from the previous week, the opening minutes saw a slow start by the Elephants and the home team took an early advantage.

With their forwards and backs combining well, they went under the posts for a converted try after seven minutes.

St Neots’ set scrum was, for the first half at least, a match for Spalding’s pack, while the away backs looked more threatening but were finding it difficult to find space and to get their passing going.

After 20 minutes, Willis Ingleby came off the bench to take the fly-half birth, with Conell Mason moving to full back and Gav Sharman to his more familiar left wing position, with Callum Lewis onto the bench.

An immediate effect was seen, as flanker Ryan Chappell made a typical tackle-busting run and a pass out to Sharman saw him outpace St Neots defence for Spalding’s opening try.

Minutes later Sharman thought he was in for his second try, but a foot in touch ruled his effort out.

Steadily, Spalding were seeing more of the ball with Harry Sharman controlling matters at the base of the scrum, Ash Anker winning his own lineout possession and the backs – with captain Dan Adams prominent – starting to dictate play.

With lineout possession secured by Harry Sharman, scrum-half Wilson Crowson set play up with a crash ball move and Anker was there to burst through, just before half time, for his first try to secure a lead at the break.

Straight from the re-start Town were on the front foot, pinning St Neots back deep in their half with good carries seen from Luke Turner and John Barrett.

That set up a position five metres out from the try line and Peter Waudby drove forward, followed by Harry Brown, but it was Harry Cole who reached out for the line.

Jacob Greaves then came off the bench for Luke Turner and was immediately into the action with a lovely pick up and offload.

The backs swiftly transferred the ball out to Matt Holmes and, with a strong run and a side step, he was over with Mason converting.

Within five minutes Anker was bursting through the middle, breaking a couple of tackles for his second try. Job done, he was replaced by Harry Exley off the bench.

Wilson Crowson then demonstrated what a good scrum-half he is becoming. From a ruck, St Neots’ guard defence was weak and he soon darted through, stepped the incoming tackle and charged through the next to score under the posts, converted by Mason.

Spalding’s pressure again told as Chappell once more showed his turn of pace, with St Neots struggling to organise in defence, and he sailed passed defenders to score under the posts.

This was a confident display by Spalding, showing more patience and teamwork as they steadily built pressure knowing that their fitness would tell in the second half.

However, their form will be truly tested next Saturday as they go to Stockwood Park (2.15pm) who are riding high at the top of the league.