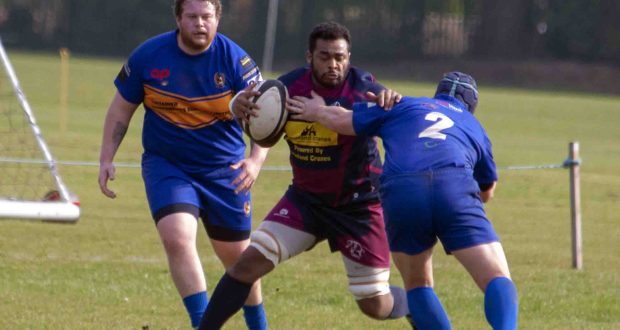 AS RELIABLE AS EVER: Ash Anker went over for one of Spalding RFC's tries on Saturday. Photo by ADRIAN SMITH

Spalding RFC suffered a heavy home defeat on Saturday as Rushden and Higham triumphed 56-14 at the Memorial Field in Midlands Three East (South).

Having beaten the runaway league leaders Stockwood Park at home the previous week – and earlier in the season had inflicted a heavy defeat on Town in the reverse fixture – it was always going to be a tough test for the hosts.

The Elephants took to the field with a team full of youthful promise, as up and coming Colts players, Will Stevenson and Harvey King made their first starts in a home league match.

Ben Shields also slotted into the scrum-half position, with Adam Sutcliffe unavailable, while young James Luto was on the wing.

There was some experience in the pack, with captain Pete Waudby, Ash Anker, Tom Parker and Sam Noble, playing number eight rather than lock, to lead and guide the team.

From the kick-off Rushden were straight away on the front foot, using their forwards effectively with carries punching holes in Spalding’s defence before they had time to settle into the match – and within five minutes they were over for their first converted try.

Steadily, Town edged themselves back into the game as their forwards, with Anker, Miguel Da Silva and Jordan Templer at the fore, gaining territory.

From a solid scrum, Ben Shields passed to fly-half Conall Mason and the ball moved to centre Gav Sharman, who stole through a gap in Rushden’s defence and was tackled inches short of the try line.

Town secured the ball and right wing Luto went over the try line, with Mason converting to level the scores after 17 minutes.

Unfortunately, Sharman had sustained a knock in the tackle and was out injured for the remainder of the game.

Rushden reacted almost immediately, using the pace of their backs with their flanker finding a hole in Spalding’s defence before going over near the posts for an easy conversion.

Town were now coming under sustained pressure, with the visitors testing their defence. Soon, the right winger had an overlap who sped in, quickly followed by Rushden’s forwards finding no guard defence at a breakdown for a further try under the posts.

Ben Shields then sustained a cut to his head and was temporarily replaced by Matt Heaton, who was making a welcome return to rugby and slotted in at flanker with Will Shields reverting to scrum-half.

Spalding played out the remaining ten minutes of the first half and were holding their own, but were 21 points adrift at the half-time whistle.

From the restart, Ben Shields was restored to scrum-half and Will Shields resumed his role as flanker and lineout jumper.

However, as hard as Town tried to get into the match, Rushden always seemed to have an extra gear – especially in the backs.

It was their full-back who cut through Spalding’s defence at pace for the next converted try.

Another one followed as, again, it was Rushden’s backs being allowed space by Town’s defensive line providing their right winger the opportunity to cut back inside for seven more points.

Spalding did have their moments in the second half, but several opportunities were wasted by poor execution.

However it was the ever-reliable Anker who grabbed a consolation score as Town were camped on Rushden’s try line and drove over.

The away side were not finished as Spalding’s defence was tiring, and in the last ten minutes two further tries were conceded to give Rushden a commanding scoreline at the close.

The loss leaves the Elephants ninth in the 12-team division, five points clear of Northampton Men’s Own in 11th spot.

Next up for Town is the toughest trip of the season so far at league leaders Stockwood Park on Saturday.