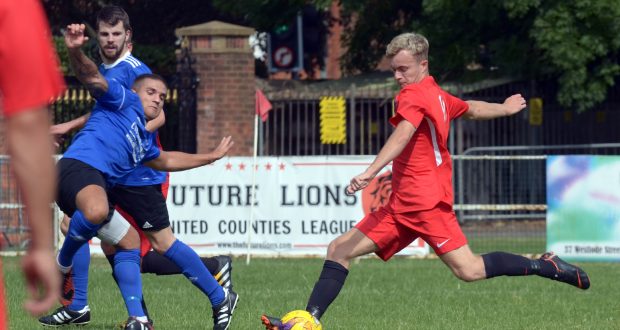 Phil Barnes knows that his Holbeach United side face another huge challenge this weekend as they continue their search for a first Uhlsport UCL Premier Division North win of the season.

The Tigers welcome title hopefuls Heather St John’s to Carter’s Park on Saturday (3pm), with the visitors considered to be one of the best footballing sides in the division.

Barnes knows that his charges, who are one of only two teams in the UCL’s top tier not to win a game after seven rounds of fixtures, will be massive underdogs.

But he’s refusing to wave the white flag ahead of the showdown.

“I’ve spoken to a few people about them and the reports are that they are a very good footballing side,” said Barnes.

“To be honest, I’ve been told they’re the best ball playing side in the league.

“All we can do is stick to our game plan and look after the ball better ourselves.

“If I know anything about football, it’s that anything can happen. If we can come out of Saturday with any kind of result, it’ll be a very good outcome for us.

“The performance last weekend was much better and hopefully we’ll have more of the same on Saturday.

“Obviously we need that first win to get ourselves going. Once we get it, confidence should build.”

Holbeach are without star keeper Ricky Drury at the weekend due to injury, while striker Kyle Compton is also struggling with a knock.

Veteran 51-year-old stopper Kev Cross, who has featured for the Reserves this season, will take over the gloves.
Jack Keeble, son of Tigers legend Shaun, will also feature after joining on loan from Wisbech Town.

But winger Fraser Bayliss has signalled his intention to leave the club after only a handful of appearances since joining from Boston Town just before the COVID-19 pandemic began.