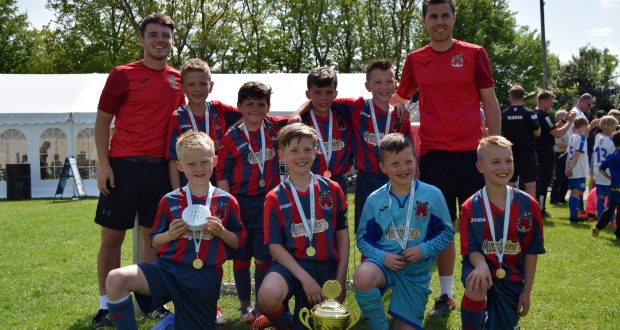 Pinchbeck United under-9 side showed England how to win a tournament abroad as they were crowned champions of the Norhaine Cup in Denmark.

The team, coached by Andrew Tidswell and Aaron Eyett, came up against sides from Denmark, Sweden and Holland in the prestigious competition – which was the first for the team abroad. The first two days were about the group matches with Pinchbeck winning four out of four matches scoring 29 and conceding only one.

Finals day saw all the group winners put into one group to battle it out for supremacy.

Following a 2-1 win and a 2-2 draw, Pinchbeck headed into the last game knowing victory would secure the title.

The final was edgy but goals from Joseph Beresford and Ethan Stoffel, accompanied by a hard-working performance and a clean sheet from keeper Craig Potter, meant Pinchbeck were crowned champions.

Coach Tidswell said: “The boys deserve so much credit as they had to overcome many obstacles to achieve this success.

“Staying in a different country in different surroundings without parents can be daunting but they all dealt with it very well.

“The different foods and the responsibility to prepare correctly for fixtures was paramount to what we were doing as the life skills they would learn from the tour was as important as the football for me.

“On the pitch they continue to improve and having been together for along period of time, these players have bought into a certain way of playing and have the confidence to execute.

“Going on tours will certainly be on our agenda again in the coming years as its so beneficial to them as people and as players of the game.”