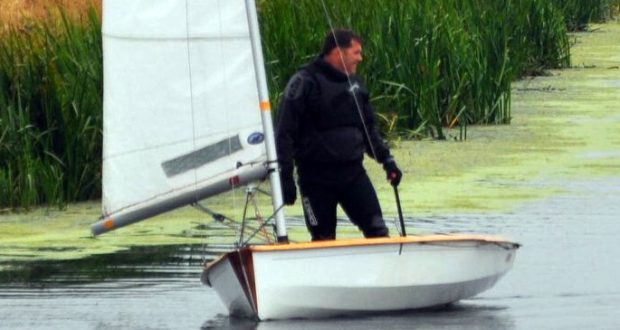 Mark Holland raced to victory at the second round of Welland Yacht Club’s Pursuit Series on Sunday.

Holland edged to top spot in a race that only attracted three members due to excessive amounts of weed in the River Welland.

The last few weeks have seen the level of weed within the river steadily increase, drastically reducing the usable area of water.

Indeed, the weed – which Welland YC have spoken to the Environment Agency about to no avail – also saw two of the three races postponed on Sunday.

The three members were buoyed by a decent breeze in a race that saw handicaps applied at the start to give staggered start times for each boat class.

With a race duration of 50 minutes, first away was the RS Vision helmed by Eric Murray with his granddaughter as crew.

Next away was the Laser of Holland, then the Phantom of Geri van Haren.

Following the short distance to the windward mark the three boats headed up river to the top of the course.

First around the lea mark was Holland, followed by van Haren then Murray.

With a lot of weed just below the surface the up wind return leg would prove challenging, with the boats getting fouled by the weed bringing some to an almost halt.

Once back towards the clubhouse Murray was caught by a gust, capsized and was forced to retire from the race.

The deeper centreboard and rudder of van Haren’s phantom also left him more prone to being caught up in the underlying weed, preventing him from making any further gain on Holland.

As a result, Holland claimed victory from van Haren in second, with the retired Murray not finishing.

It was then decided not to carry on with the next two races due to amount of weed in the river.

Anyone wanting to find out more about sailing should contact the club via email secretary@wellandyachtclub.co.uk with their questions.