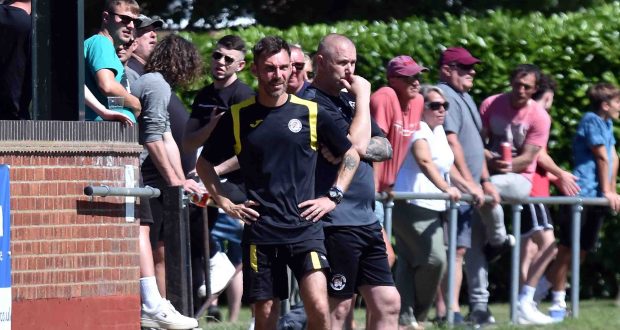 Co-boss Danny Clifton admits that the atmosphere at Holbeach United throughout pre-season has been a “breath of fresh air” ahead of the start of their Thurlow Nunn League Division One North campaign this weekend.

The Tigers endured a nightmare season last time out as they went the entire season without a win and were relegated from the Uhlsport UCL Premier Division North.

But Clifton, who will share the managerial duties with Simon Roberts this season, has watched on with delight as his side have impressed in the summer – beating Deeping Rangers, Bourne Town and Crowland Town while drawing with Yaxley.

He feels that his side are more than ready for competitive football and can’t wait to face Needham Market under-23s at Carter’s Park on Saturday (3pm).

“It’s been a total transformation,” enthused Clifton. “Things have gone better than I could have realistically expected.

“We had 38 players turn up for pre-season on day one and have whittled that down to 20 for the season.

“That means that we’ve had this group together for a long time and we’ve been able to develop a philosophy and create a positive environment here.

“We’ve not brought any players in from higher levels. Some have come sideways, a few have stepped up and a couple stayed on from last season. And do you know what? I’ve not heard money mentioned once.

“That shows me they’re here for the right reasons, which I’ve never known before.

“I feel like we’re very well prepared and that we have a plan to move forward with.

“We treated pre-season like competitive games and, especially after the Deeping win, you could see that people in and around the club are buying into what we’re trying to achieve.”

Kicking off their league season when Step Five sides begin their Emirates FA Cup adventure will be something of a shock to the system for all at Holbeach, as they embark on a campaign in Step Six.

The pressure will be on Clifton and Roberts to bounce back and immediately secure promotion, but the joint Tigers chief has a simpler aim for the season.

“I just want us to win as many games as we can,” added Clifton. “There’s no pressure on the lads from our end, none at all.

“We’ve got a positive atmosphere here and that will stand us in good stead.

“Last season was very hard and it was great to taste victory during pre-season.

“Now we need to take that into the league fixtures and make Holbeach a club that wins football matches again.”

Clifton has 18 players to choose from on Saturday as the Tigers step into the unknown against unfamiliar opposition.