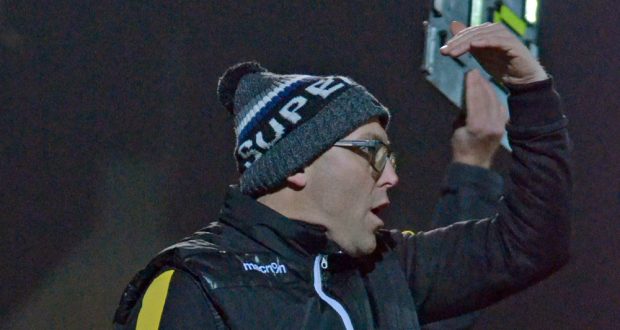 FINISHING WITH A FLOURISH: Seb Hayes Photo by JAKE WHITELEY

Boss Seb Hayes has told his Holbeach United squad to stop feeling sorry for themselves.

The Tigers are currently on a dire run of results that has seen them lose five matches on the bounce, conceding 16 goals and going out of two cups in the process.

Having suffered the indignity of going out of the ChromaSport UCL Knockout Cup to lower-graded Olney Town last weekend and then a 3-2 Lincs Senior Trophy loss at struggling Boston Town, Hayes admits that morale at is now at rock-bottom at Carter’s Park.

Things aren’t getting any easier for the men in black and yellow, either, with a UCL Premier Division trip to second-placed Eynesbury Rovers next on the agenda this Saturday (3pm).

Hayes does have what he believes to be the strongest Holbeach squad he’s ever had available at his disposal, but knows that the trip to the Alfred Hall Memorial Ground will be very tough.

New signing Dan Jenkins should go straight into the squad after making his debut at Boston, while it is hoped that Jake Clitheroe will be involved after also featuring at DWB Stadium.

“Things have been tough” said Hayes. “But we’re only one win away from turning things around.

“What I want to see more than anything is players stopping feeling sorry for themselves.

“I spent a bit of time chatting to some fans after Saturday’s game. It was nice to get their perspective and they were very supportive.

“Obviously they aren’t happy with what they are seeing, but who would be?

“Barring any injuries, we do have a very strong squad fit and available for Saturday. Dan Jenkins has signed and I’m hopeful that Jake Clitheroe will be back in the fold too.

“That’s huge for us, as we really don’t have any competition for places. I want players fighting for the shirt and giving their all for the football club.

“It won’t be easy at Eynesbury, though. They are absolutely flying at the moment and the league table shows that.

“We have seemed to face a lot of in-form teams in recent weeks. Deeping and Wisbech were both on unbeaten runs when we played them and Desborough are going well too.

Hayes was able to speak to transfer target Lewis Leckie on Tuesday night. The Blackstones striker is a top target for the Tigers chief, who is hoping to convince the ex-Deeping Rangers and Oakham United man to make the trip to Carter’s Park.

He admits that signing players has proved much more difficult than he expected, however, having been quoted sky-high wages by a number of possible targets.

“I want people to think ‘Holbeach want me, that’s a big club’ – not quote me three figures. We want people here that actually want to sign and will give their all for what I believe is a very big club.”

Saturday’s hosts Eynesbury are unbeaten in their last seven UCL Premier Division games and have won 20 of their 28 games so far.

They go into the clash some 15 points clear of Holbeach in the standings.