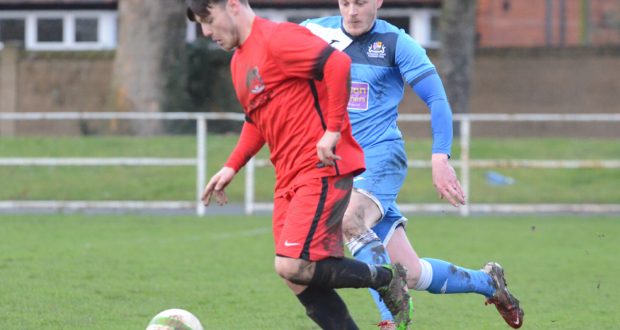 AT THE DOUB Aaron Eyett, pictured in red. Photo by JAKE WHITELEY

It’s a case of one in, one out for Holbeach United as boss Phil Barnes continues his pre-season preparations.

The Tigers have moved to sign the talented Aaron Eyett, who has enjoyed successful spells with Boston Town, Pinchbeck United and indeed Holbeach in recent years.

Having been a regular at training since the boys in black and yellow returned, Barnes has received a commitment from the skilful attacking midfielder.

But the Tigers boss has been rocked by the departure of defender Jack Withers, who has opted to move to higher-graded Stamford.

Having also lost Josh Ford, Adam Jackson, Jon Fairweather and Spencer Tinkler in recent weeks, Withers was being primed to be a regular in the heart of the defence.

But the lure of Graham Drury’s Daniels proved too much for a player who was once on the books of Swansea City, leaving Barnes needing a new signing in defence.

“It’s a bit of a blow to lose Jack,” admitted the Holbeach chief. “We had hoped he’d stay and play a full season with us, which is probably what he’s needed since leaving Swansea.

“He has looked good in training and he was very much in my plans as a starter this season. But all I can do is wish him well and say that the door remains open if things don’t work out for him.

“We are hoping to sign another defender this week, but it’s not something we can announce yet.

“I am very pleased that Aaron has agreed to join, he’s exactly the kind of player we need.

“He can play as a winger and is great on the ball, but we may look to use him in midfield – we’ve been short on players with his kind of ability on the ball in the middle.

“We’ve also had three other lads training with us who look very capable. It’s probably a bit early to talk of signing them on, but it’s certainly a possibility if they perform well in the matches.”

Holbeach kick off their pre-season fixtures on Saturday with a trip to Wisbech Town (3pm), before visiting Huntingdon Town on Tuesday (7.45pm). The latter was rearranged from last Tuesday night due to the Euro 2020 clash between England and Germany.

The Knights lost 1-0 at Huntingdon on Saturday and drew 1-1 with Lincoln United Development Squad last Wednesday.

Their home game with Ketton this Saturday has been cancelled.