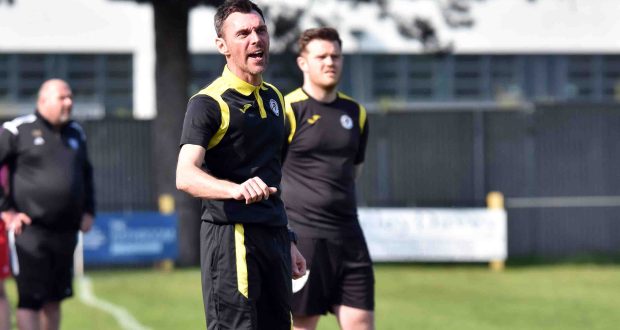 Upbeat Holbeach United manager has called on the club’s sceptics to “trust in the process” as they prepare for the new season in the unfamiliar surroundings of the Eastern Counties Football League Division One North.

Clifton, who will be joined by Simon Roberts and club stalwart Ricky Drury as a three-man management team next season, has confirmed that he’ll be staying on with the Tigers after their disastrous relegation from the Uhlsport UCL Premier Division.

Many had expected that Holbeach would drop down into UCL Division One, but their move to the ECLN has been described as a nightmare by a host of respected names on social media, including former player and boss Danny Hussey.

But Clifton, who revealed that he has 28 players coming to the club’s first pre-season session on June 4, is happy with the change of league – insisting that others in and around the club should focus on helping to make new memories instead of focusing on past glories.

“Obviously there was a lot of chat about whether I’d be staying,” said Clifton, who was the third manager Holbeach had last season. “But that’s all sorted and we’re moving forward now.

“I’m pleased that Simon and Ricky have agreed to join me in the management team and I want us all to have equal standing as a trio.

“I’ll still be the person who speaks to the club, but I’d like the players to be able to come to all of us and have equal levels of respect.

“I’ve put forward a model to the club that we need to implement and we’re working towards that now, which is exciting.

“This club has great infrastructure, and we’ll have a real pathway for youngsters to take as they make their way from youth football to men’s football.

“As a first team, we’ve just had a really bad season. We need to move forward and learn how to win football games as a team again.

“We’re also not looking backwards at the UCL and players who have enjoyed great success here in the past.

“It’s time to create new Holbeach players and new rivalries with other teams, at least until we’re ready to challenge for promotion again.

“Yes, there’s lots of travel and many teams we’ve not faced in this new league, but it’s time to start afresh.

“There would have been a lot of travel in UCL Division One too. We’ve targeted players who are used to this kind of trip and won’t be bothered by it.

“It’s something new and if we’re in the promotion mix at the end of the season, that’d be a huge bonus.”

Clifton, who is still looking for a first win as Tigers manager after they went the entire 2021/22 season without a victory, has already arranged pre-season fixtures with Deeping Rangers, Wyberton and March Town.

But he admits that the club’s traditional rivals – the likes of Spalding United, Wisbech Town and Boston Town – have shown no interest in playing them ahead of the new season due to their relegation.

The Tigers chief also added that the 28 players joining up for pre-season are predominantly on the young side – with 28-year-old Luke Chester currently the oldest committed to try out.

“Holbeach is a club in transition,” added Clifton. “Trying to arrange friendlies, you can see that our traditional rivals don’t really want to play against us now.

“I’m afraid we’re no longer a first team on the same footing as them. Fans and people within the club need to accept that, sadly.

“We’re at the start of a big process here and everybody has to start looking forward and trust that we’re going to get it right long-term.

“There’s a lot of young talent out there and we hope to be able to harness that next season and beyond.”