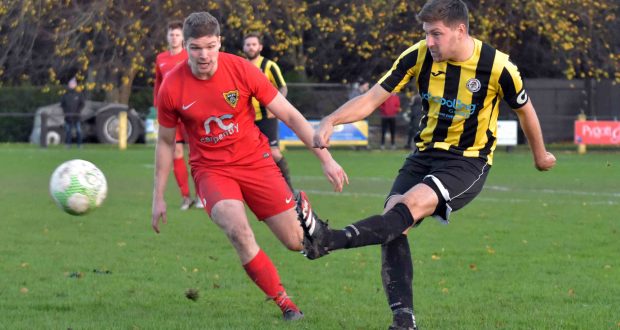 ON THE MOVE: Spencer Tinkler is leaving Holbeach for Yaxley. Photo by JAKE WHITELEY

Phil Barnes is refusing to press the panic button after Holbeach United lost three key members of their squad.

The Tigers boss has been told by skipper Spencer Tinkler that he is joining Yaxley, while popular defender Jon Fairweather has agreed to re-join former club Wisbech Town.

Both sides will be rivals with Spalding United next season in the NPL, which is one level higher that the UCL Premier Division North.

Also exiting Carter’s Park is Holbeach native Adam Jackson, who has advised Barnes that he will be taking up a contract offer from lower-graded FC Parson Drove.

These exits follow the departure of forward Josh Ford, who is taking time out from the non-league scene and is expected to play at a lower standard.

Barnes, who is hopeful of announcing a few new signings in the coming weeks, is obviously disappointed to lose three players who have been regular starters in his time with the club.

But he wished all three well, revealing that they were open and honest with him and spoke to him personally before leaving.

“It’s obviously a big blow to lose those three,” said Barnes. “All three have been big players for us and are well liked and respected by all.

“When it comes to Jonno, he’s played more than 400 games for Wisbech and they are his local side.

“He wanted to have a crack playing for them again – and at a higher level – before he stops playing and I can respect that.

“I can’t fault him in any way. He called me first to tell me and leaves with the best wishes of both me and the club.

“Spencer has never played at a higher level and told me that he wanted to give it a try. Again, he was open and honest and I have to respect his wishes.

“He’s been a great captain and he and Jonno will leave massive holes to fill. You can never complain when players want to better themselves and play higher.

“As for Adam, he’s been offered a contract to join Parson Drove and has been very open about it.

“It’s obviously disappointing when a player drops down, but I can’t argue with his reasons.

“He’s been a great player for Holbeach over the years and we’ll all miss him on and off the pitch.

“It’s now on me to get a few players in. Last week I was a bit concerned when all three came to me and said they were leaving.

“But I’ve spoken to a few people and I’m hopeful we’ll have a few new signings to announce in due course.

“Both Nick Jackson and Fraser Bayliss joined just before COVID shut football down, so they’ll already be like two new signings for us.”

Holbeach returned to pre-season training on Tuesday night, with Barnes expected to have a number of new faces in attendance.

Three of the potential new signings – two defenders and one winger – will be known to Tigers fans as former players and UCL regulars, while the other two have made their names at a lower level and are deemed ready to step up.