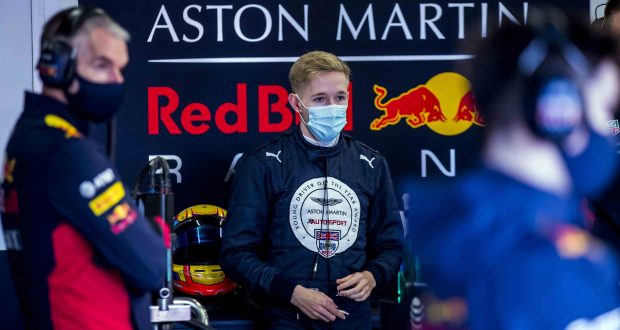 In the space of a few weeks Johnathan Hoggard has gone from the excitement of driving a Formula One car to the frustration of not being able to even go to the gym.

But the Weston Hills race ace is hoping to announce his plans for the 2021 race season soon.

Hoggard ended last season with his first F1 test driving the 2012 World Championship Red Bull as part of his prize for winning the 2019 Aston Martin Autosport BRDC Young Driver of the Year Award awarded after an impressive debut season in the BRDC British Formula 3 series that saw him clinch seven wins for Fortec Motorsports.

Now the 20-year-old is finalising his plans for the 2021 campaign.

“The Red Bull test was a great experience and I sure do miss the feeling of being in a race car,” Hoggard said. “It feels like it has been quite a while now after everything that has gone on over Christmas and the new year with the new lockdown. At the minute, things are quite quiet for me trying to organise plans for this year.

“Obviously COVID has added the challenge of now even being able to get to the race track having to comply with all the rules and regulations countries are imposing.

“Although I have tried to keep busy since the lockdown came into effect at the start of January, it has been hard to train for the new season since gyms are closed. One of the things that helped keep me busy through the tier system was the fact that gyms etc were still allowed to operate, but hopefully we will get to a point where we can start to ease restrictions!

“Hopefully I will have some news in the coming weeks or month about what I am doing.”