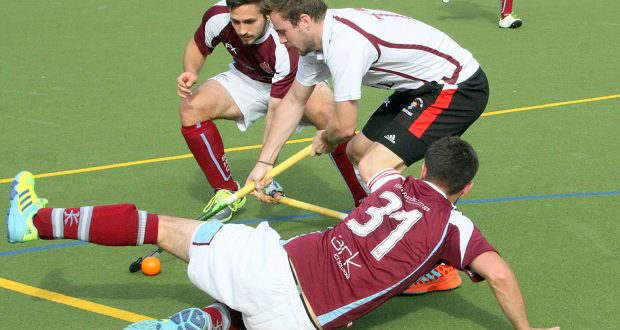 ALL HANDS ON DECK: Spalding 1st were handed a big defeat by hosts Harleston. Photo by MARK LE SAGE

Hockey round-up: Unlucky 13 as Spalding 1st are mauled by Magpies

Spalding 1st were on the receiving end of a masterclass display by a ruthless Harleston Magpies team as they lost 13-0 in East Men’s Hockey League Premier A on Saturday.

Travelling to Norfolk with five players unavailable, Spalding knew this was always going to be a difficult task and they weren’t allowed to settle in the pouring rain – conceding three in the first ten minutes.

Spalding continued to battle but had no real answer to the neat interplay Magpies produced and went into the half time break 5-0 down.

With the second-half objective to try and keep the scoreline respectable, Magpies had other ideas and continued to expose defensive frailties by passing and moving the ball around at pace.

Spalding, who are now bottom of the table, were unlucky with some of the decisions and goals which were conceded and believed the scoreline did flatter the home side. But they were dealt a severe lesson regardless.

Most key players return and this is now going to be decisive game to set up the rest of the season.

There was better news for Long Sutton in Division One, as they beat Cambridge City 3rd 4-1 to get their first Division One win of the season at the seventh time of asking.

In what was a stunning team showing, Ben Shore helped himself to a decisive hat-trick. The first of those two strikes gave Sutton a 2-1 half-time lead, then his third set the stage for Josh Fyson to round off the scoring.

In Division 3NW, Spalding 3rd also secured their first league win of the season with an impressive 2-1 success over Leadenham 1st.

A dominant first-half display was earned through work and some excellent interplay with goals from James Reston and Alan Charvecius the least they deserved.

Leadenham improved after the break and pulled one back, but Willem Borst wasn’t intent on letting anything else past as his side sealed a morale-boosting victory.

However, Spalding 2nd slumped to their seventh successive defeat with a 3-1 reverse at St Neots 1st.

The game was closer than the scoreline suggests, but Spalding found themselves 3-0 down before player of the match Jacob Baker pulled one back.

Gary Hales (3) and Josh Baker (2) led the way at the Peele Leisure Centre, while Will White capped a star man performance with a goal and Ben Smith also bagged once.

The highest-scoring game of the week saw Spalding 4th suffer a 6-5 defeat at Wellingborough 1st.

They shipped a goal inside the opening minute and, despite Jack Martin’s clever equaliser, Spalding soon found themselves 4-1 down.

Ben Scholes’ solo strike made it 4-2, then a goal-of-the-season contender from Kieran Scholes got them within a goal. Amazingly, Martin’s second and a deflected finish from Alex Cunnington then put Spalding 5-4 ahead – only for two short corner strikes to give the hosts a remarkable win.

Hoping for a win to get their season back on track, the Poachers became the first team to lose to Pelicans and are now just three points above the bottom three.

In the same division, Long Sutton 1st lost for the first time this season as they went down 3-2 at Cambridge City 3rd. Leah Goodley’s brace was scant consolation for them.

Trailing 2-0, Alanna “AJ” Bunyan netted to give Spalding hope with a few minutes left – but Bury added a late third.

It was derby day down in Division 4NW (N), as Long Sutton 2nd and Spalding 3rd squared off.

In what proved a tight tussle, both teams had a lot of very talented juniors playing on the day.

Roz Dennis got the only goal as Spalding won 1-0.