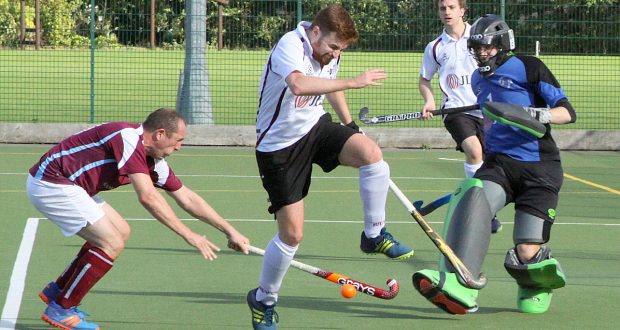 Spalding 1st may have lost their fourth East Men’s Hockey League Division A game on the spin on Saturday – but they gave a good account of themselves against Wapping 1st.

Promoted Spalding put in an excellent performance against a side who had been relegated from the National League last season, but ultimately lost 6-2 at Glen Park to stay bottom.

Spalding’s work rate in the first half was second to none, as they crowded Wapping out and made themselves very difficult to breakdown.

The hosts were very quick on the counter and were unfortunate not to get more inside the Wapping circle than they did, thanks to some excellent individual skills from their front line.

Eventually Spalding got the breakthrough when they were rewarded with a short corner which Stuart Cunnington flicked well – only to be stopped on the line by a Wapping body.

Connor Allen then despatched the penalty stroke into the top left corner of the goal. Wapping quickly levelled after a dubious short corner to make it 1-1 at half time.

However, Spalding started the second half slowly and allowed Wapping to score three goals in ten minutes to move 4-1 ahead.

The home team did, to their credit, get back into the game and enjoyed a spell of possession which led to a Cunnington wonder goal.

This turned out to be a consolation, however, as Wapping added two more goals to ease to victory.

Elsewhere, Long Sutton 1st suffered a 3-1 defeat at Broxbourne as their bid for a first win of the season continued.

Luke Jackson was the sole Sutton scorer, with Matt Goodley man of the match.

In Division 3NW, it was another tough day for winless duo Spalding 2nd and Spalding 3rd.

Spalding 2nd were handed a 4-0 home reverse by an experienced Ely 1st outfit, despite winning four penalty corners in the second half.

The scoreline was worse for Spalding 3rd, who went down 5-0 at Cambridge Vets.

George Halgarth’s impressive debut performance up front was their highlight.

Down in Division 4NW, Long Sutton 2nd suffered their second loss of the season as they went down 1-0 at Cambridge South 3rd.

In Division 5NW, Spalding 4th put in an excellent showing to beat Kettering 2nd 4-1 and end their 100 per cent record.

A seventh-minute short corner that was dispatched by the evergreen Jeremy gave Spalding an early lead, but Kettering – who were always dangerous – scrambled home a leveller from a short corner of their own before the break.

The second half saw Spalding continue to apply the pressure and another short saw them go back ahead when Ben Scholes pounced to fire home.

It was 3-1 when the excellent Chris McKenna got a well-deserved goal with a neat reverse, before the same player completed the scoring with a short corner ten minutes from time.

Spalding 5th fared much better as they thrashed Leadenham 3rd 5-2 thanks to goals from Darren Wilson (2), Dan Azzopardi (2) and Jacob Drew.

Strikes from Jess Ball, Macy Carr and Evie Maltby did the job for the Poachers at Glen Park – moving them up to third in the table in the process.

The Poachers, who now have seven points from four games, will hope to build on that result in their derby game at CoP 2nd on Saturday (10am).

Also on form in Division 2NW were Long Sutton 1st, who romped to a 4-1 home success over Cambs Nomads 1st.

The victory leaves Sutton – unbeaten after four games – second in the standings behind leaders Cambs South on goal difference.

Spalding Poachers 2nd are flying high in Division 3NW after a 4-1 triumph at Huntingdon 1st.

It wasn’t long until AJ Bunyan scored her first goal. Soon after Eva Keyes decided she wanted one as well.

Not done there, Bunyan scored two more to clinch an amazing hat-trick – making her a well-deserved player of the match.

In Division 4NW (N), Alison Harrison-Wild notched a rare goal for Spalding 3rd as they earned a hard-fought point against Alford at sunny Skegness.

The 1-1 draw leaves the Poachers in fifth place.

In the same division, Long Sutton 2nd went down 2-0 at home to Spilsby 1st as they suffered a maiden defeat of the season.