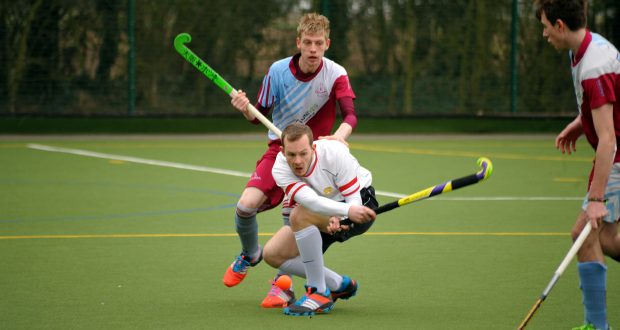 Spalding 1st saw their title dream in East Men’s Hockey League Premier B dashed by CoP 2nd on Saturday as the city side clinched the crown with a 3-2 victory at Glen Park.

Hosts Spalding started the top-of-the-table clash much the better at Surfleet – and went ahead when Stuart Cunnington set up Glen Richardson, who showed immaculate touch and a surprising turn of pace before firing home a crisp strike.

However, table-topping Peterborough reacted with two quick goals before the break to go 2-1 up and leave Spalding needing a big second half.

Once again, the home team looked the sharper side in the second period, but they failed to capitalise on a couple of short corner opportunities.

CoP made them pay, as a momentary lapse allowed them in for a third goal.

Robert Dalton returned fire to set up a grandstand finish, but the visitors held on to clinch the title and promotion.

Spalding are still favourites to seal second place and follow CoP up to Premier A, but must negotiate a tough trip to fourth-placed Norwich City on Saturday.

Defeat could see them slip to fourth, but they do have a game in hand.

Elsewhere, Long Sutton 1st  ended any lingering relegation fears they may have had in Division One with a 3-2 win at Norwich City 2nd – confining the hosts to the drop in the process.

Josh Fyson stepped up and fired home the resulting penalty – but that triggered a response from the hosts, who notched twice to level the scores up.

However, there was still time for Fyson to rocket a beautiful deflection into the top corner to seal the win with a goal fit to settle any game.

In Division 3NW, Long Sutton 3nd and Spalding 2nd drew 3-3 – a result that does neither side any favours in their respective bids to beat the drop.

A brace of goals from Darren Grooby and a sweet strike from James Stone gave Spalding a commanding 3-0  lead at half-time.

But, with ill-discipline creeping in once again, Spalding were reduced to nine players for periods after the break and Long Sutton took full advantage two claw their way back into the game and secure a point.

Gary Hales got the comeback rolling at the Peele Leisure Centre when he intercepted a stray pass and beat the keeper one-on-one.

Short corners then provided the home team’s way back to parity. Nick Ellis placed an accurate direct strike into the corner and then had a second deflected into the net for 3-3.

Indeed, had Will White’s angled shot not found the base of the post late on, Sutton could have been celebrating.

In the same division, Spalding 3rd all but secured their survival with a thrilling 4-3 win over CoP 4th.

Alan Cerevicius’ early goal ensured Spalding went in for half-time level at 1-1, then Dave Burrell put them ahead early in the second period.

Two goals in quick succession from the city boys changed the game and suddenly Spalding had to fight back from 3-2 down.

Captain Steve Rogers led from the front and smashed home a short corner to make it 3-3 – and then crowned a great fightback with another sweet strike.

Sutton saw off Alford 1st 3-2 in their final home game of the season on Saturday – meaning that wins at lowly Bourne Deeping 1st (this Saturday) and rivals Newmarket (April 1) could be enough for second place if other results go their way.

Leanne Woodhead and Charlene Leuty had earlier scored as Sutton came from 1-0 down, with Tancred beautifully burying the winner.

In the same division, Spalding Poachers 1st slumped to only their second defeat in 2017, going down 3-1 at CoP 2nd.

Charlotte Boreham’s first-half goal had seen them lead 1-0 at half-time.

In Division 3NW, Spalding 2nd earned a fine 4-0 victory over CoP 3rd at Glen Park. All four goals came from Alanna “AJ” Bunyan, who was on fantastic form.

In Division 4NW (N), both Spalding 3rd and Long Sutton 2nd lost heavily. The Poachers’ third string went down 4-0 at CoP 4th, while Sutton were humbled 13-0 by hosts Spilsby 1st.