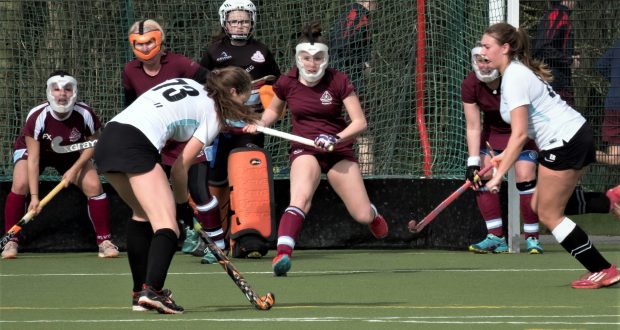 Their 16th win from 19 matches sees Sutton sit eight points clear at the top with just three games left to play – meaning the title is within reach ahead of this Saturday’s trip to Cambridge Nomads 2nd.

Josh Fyson was the star of the show at the Peele Leisure Centre, firing four goals in the one-sided affair. Tyler Hagan (2), Luke Jackson, James Collingwood-Smith and

Harry Braginton also netted, with the latter being named man of the match.

In the same division, Spalding 2nd were held to a 1-1 draw at Kettering 2nd thanks to Peter Wright’s strike and Spalding 3rd romped to a 4-1 home success over Alford 1st.

The 3rd side remain second, seven clear of third place, while the 2nd team are 11 points behind their club mates in fourth.

Up in Premier B, it was a day to forget for Spalding 1st as they dropped into the bottom two courtesy of a 4-1 home reverse against Havering 1st.

Down a level in Division 2N, Long Sutton 1st were handed a 2-1 reverse by St Ives 1st despite Josh Baker’s strike. The hosts netted their winner with two minutes left.

In Division 5NW, Spalding 4th were handed an 8-2 beating at Horncastle 2nd, while Long Sutton 3rd were thumped 6-1 by hosts Bourne Deeping 5th in Division 6NW (N). Jon Goodley got their goal.

There was a 3-2 win for Spalding 5th over Alford 2nd in 6NW (N), though, as Oliver Smith, Charlie Smith and Andy Barlow all scored.

The hosts were clinical with their finishing and put Spalding to the sword, but Poachers were buoyed by the performances of Mia Dewing and Kelly Slater.

It was a better day for Long Sutton 1st, who won 3-1 against St Ives 1st thanks to goals from Charlie Leuty, Connie Gittins and Sarah Walker.

Sutton are now three points ahead of Spalding, with the duo set to meet in a Glen Park ‘six-pointer’ on Saturday (12.30pm).

Long Sutton 2nd were beaten 4-0 by Horncastle 3rd in the same division, despite a strong showing from Katie Collingwood-Smith.