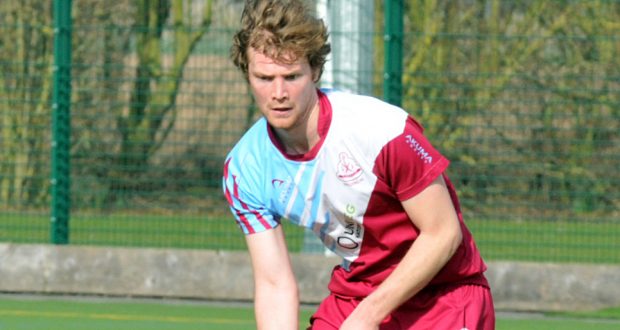 A hard-fought draw at fellow promotion candidates Norwich City on Saturday saw Spalding 1st clinch promotion to the East Men’s Hockey League Premier A division for the first time in the club’s history.

Spalding had the ideal start when short corner specialist Stuart Cunnington whipped home one of his trademark flicks in the second minute.

Both sides struggled at times to come to terms with the bouncy pitch and play became scrappy with Spalding having to change their normal pattern of play.

The home side forced their first short corner on 20 minutes and managed to scramble home an equaliser.

However, the visitors bounced back immediately and enjoyed a spell of domination – which was rounded off with another Cunnington short corner strike.

But, just as the half-time whistle approached, the ball fell into the path of a Norwich forward who slotted home from close range for 2-2.

The second half was dominated by aerials, with both sides trying to use the bounce to their advantage.

As a result, the play became stretched and it was some time before Spalding got back in control. Connor Allen and Harry Vickers both came close to adding to the away tally, but they were denied by some good keeping.

On the stroke of full time, Norwich were awarded a short corner which threatened to snatch victory at the death, but Spalding’s defence held firm and the necessary point for promotion was secured.

Down a level in Division One, Long Sutton 1st lost 2-1 at home to Upminster in their penultimate game of the season. Ben Shore’s strike did give them a 1-0 lead at the Peele Leisure Centre.

But, despite a man-of-the-match showing from Dan Batten, they shipped two quick goals as they tired.

In Division 3NW, Spalding 2nd beat friendly foes Spalding 3rd 3-1 to ensure that both sides will avoid the drop this season.

All of the goals came in the first period, where the contrasting styles of the two teams was clear to see.

However, Long Sutton 2nd remain deep in the relegation mire after an 8-0 thumping at St Neots 1st.

They must now beat already-promoted Horncastle – who will win the title with a victory – by a huge margin to have any chance of survival in their final game.

With second-placed Cambridge City 3rd losing 4-3 at Newmarket 1st, Sutton beat hosts Bourne Deeping 3-2 to take their bid for a second-placed finish to the final day of the campaign.

Trailing 1-0 at half-time, Sutton roared back in the second half and levelled when Leanne Woodhead squared for Lyn Tancred to tap home.

The hosts went back ahead almost instantly, which prompted Sutton to go all-out-attack.

Woodhead duly levelled from a short corner, setting the stage for Tancred to score a dramatic last-minute winner.

Sutton visit third-placed Newmarket on Saturday for a winner-takes-promotion clash – though the hosts only need a draw.

Elsewhere in Division 2NW, Spalding Poachers 1st rounded off their league season with a resounding 5-1 victory over Cambs Nomads at Glen Park.

The win ensures that Poachers finish in sixth spot.

In Division 3NW, Spalding Poachers 2nd won 1-0 at an experienced Haverhill side in their penultimate game of the campaign. The winning goal came from player-of-the-match Ellie Holland, who scored from a very difficult angle to give Spalding a deserved advantage.

Katie Beeson’s neat finish did give Poachers a 1-0 lead, but it was keeper Abi Hodgett who stood out with a string of fine saves.

Louise Billingham, Alex Petty and Georgina Synott netted for them.