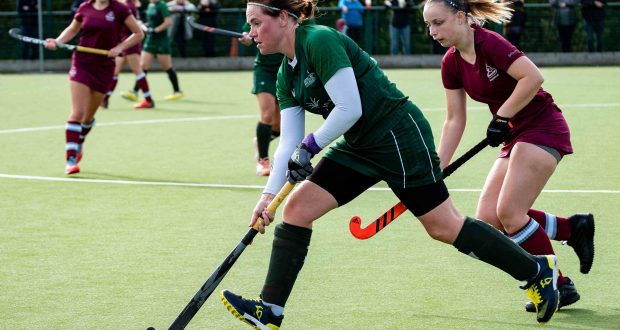 HONOURS EVEN: Action from Spalding's 1-1 draw with Long Sutton. Photo by KEN SMITH

Ahead of the all-South Holland clash, Spalding had racked up three wins from as many games while Sutton had only managed one victory.

It looked like the Surfleet showdown was going with form when Kelly Slater tapped home a 12th-minute opener, but the visitors hit back to level when Amber Jones finished off Gemma Parr’s free hit.

Spalding pushed for a winner, but – despite numerous short corners – were unable to beat an inspired Lorraine Wallis.

Sutton are at home to Saffron Walden this Saturday (1pm), with Spalding visiting Cambs South (3pm).

Player-of-the-match Kate Amess and skipper Charlotte Morris netted to put them 2-0 ahead at the break, with Morris rounding off the scoring with her second after the break.

Goals from Stuart Cunnington and James Mayhew earned them a 2-2 draw with Havering 1st on Saturday. But they were then thumped 10-5 at Sudbury on Sunday despite goals from Cunnington (2), Joe Higgins (2) and Mayhew.

Spalding will hope to get back to winning ways when they host Upminster 1st on Saturday (2pm).

In Division 2N, Long Sutton 1st are still seeking their first point of the campaign after a 3-1 home loss against St Ives 1st.

Josh Baker had given them the lead at the Peele Leisure Centre, but two late goals denied them at least a point. They’ll try again at Norwich City 2nd on Saturday (2.30pm).

In Division 3NW, Jacob Baker’s fantastic late strike earned Spalding 2nd a 1-1 draw at Ely City 1st. They had dominated the second half without reward until Baker beat a man and unleashed an unstoppable reverse stick effort to secure a point.

In Division 4NW, Spalding 3rd picked up their second win of the season by seeing off Kettering 2nd 3-2 at Glen Park. Hugh Cruickshank (2) and Max Bland were the scorers as Spalding moved up to eighth in the table.

Meanwhile, Spalding 4th were handed their first defeat of the Division 5NW season.

In a clash of two sides with 100 per cent records, they lost 5-2 at Wisbech 3rd despite goals from David Burrell and Oliver Smith.