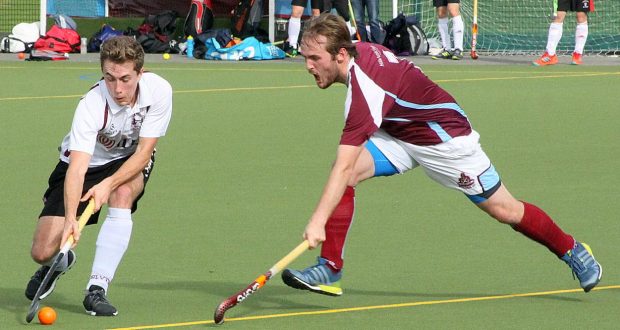 UP AND RUNNING: Spalding picked up their first Premier A point. Photo by MARK LE SAGE

Hockey round-up: Basement battle draw gets Spalding 1st off mark in Premier A

Promoted Spalding 1st finally have their maiden East Men’s Hockey League Premier A point after a 1-1 draw with fellow strugglers Ipswich 1st – but they were left to rue late missed chances at Glen Park.

With both sides having failed to register a point between them in their opening five games of the season, it looked like being an early-season six-pointer.

It was the visitors who started the brighter, forcing several penalty corners and a Josh Rowbottom goal line clearance, but Spalding weathered the early storm and steadily got into the game.

They went ahead when a penalty corner was neatly deflected home by Liam Brazier, but Ipswich scored just before the interval to tie the scores going into the half time break.

The second half became a more open and expansive game, with both sides creating chances. Spalding won several penalty corners right at the end of the game, but were unable to capitalise.

Down in Division One, Long Sutton 1st are also still seeking a maiden win after a 4-1 defeat at Sudbury 1st.

Will Cook’s majestic finish had given them the lead, but the hosts roared back to inflict a fifth defeat in six games on struggling Sutton.

Spalding 2nd were left frustrated after a 2-1 home defeat against CoP 5th.

Rick McKenna’s late goal was all they had to show for their efforts.

Spalding 3rd suffered a 4-0 loss at Bourne/Deeping 2nd – but did put in a solid second-half performance.

In Division 4NW, a Nick Ellis treble fired Long Sutton 2nd to a 4-1 win over Bourne Deeping 4th. Josh Baker got the other goal.

Spalding 4th were the big winners of the week in Division 5NW, walloping basement side CoP 7th 10-1.

Darren Wilson led the charge with a double hat-trick, while Alex Cunnington (2) Max Bodimead, Ben Scholes rounded off the rout.

Elsewhere, Spalding 6th enjoyed their first win of the season with a 4-2 triumph at Bourne/Deeping 5th.

Also on winning form were Spalding 5th, who earned a key 1-0 win over fellow high-fliers CoP 8th thanks to Jack Martin’s strike.

Long Sutton 3rd also continued in their winning ways with a 2-0 win over Wisbech 4th. James Collingwood Smith and Ian White got the goals.

Goals from Lisa Baker and player of the match Amber Jones gave Sutton a fifth win from six games.