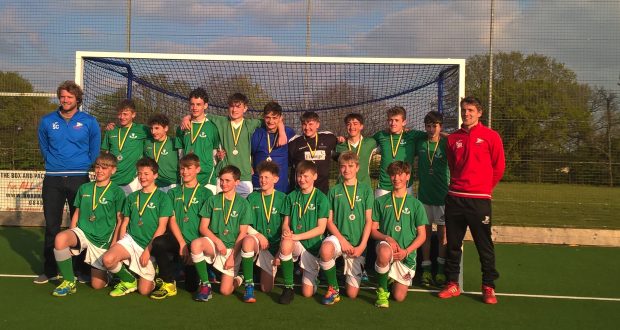 Spalding Hockey Club celebrated its annual presentation evening with a packed house on Saturday evening with junior awards being followed by the senior club awards.

Junior committee member Dave Mayhew reported on yet another outstanding season for the club’s junior section.
More than 150 young players have attended the club’s coaching sessions over the season with an average attendance on Saturday mornings of around 80 youngsters.
Teams representing the club have performed well in the Lincolnshire under 12 and under 14 leagues throughout the season.
The club has formed an academy team for players aged 11 to 15 to give the youngsters experience of 11-a-side games and full pitch matches.
Games have been played in the Hurricane Sports League and also a series of friendly fixtures.
The club’s under 14 boys won their way through to the last 32 in the country in the England Hockey competition.
The under 14 girls team performed well in a Norfolk tournament and will be looking to enter the national competition next season.
Awards for the juniors: Under 8 Most Improved – Harry Burton, Rising Star – Dylan Hind; Under 10 Most Improved – Liam Fravigar, Rising Stars – Oscar Haunch and Tabitha Dunnett; Under 12 Most Improved – Oli Baker, Rising Stars – Harry Blackman and Maddie Haunch; Under 14 Most Improved – George Tansley, Rising Stars – Alex Doughty and Mia Dewing; Junior clubman – Alfie Fletcher.
With the men’s first team being promoted to the East Premier A league for the first time in the club’s 63 year history and also becoming Lincolnshire champions, there was much to celebrate.
The ladies first team finished fifth in their league and were only narrowly defeated in the final of the Lincolnshire Championship.
All the other teams had enjoyable and encouraging seasons with the outstanding team being the men’s fourth team.
They achieved a 100 per cent record, scoring more than 100 goals in the process. An excellent season for a team made up of a few seniors and the majority players who have only recently moved up from the junior ranks.
Awards for the seniors: men’s fifth team – Tim Amess; men’s fourth team – Jeremy Watt; ladies’ third team – Stephanie Mountney; men’s third team – Nathan Davy; ladies’ second team – Leanne Pick; men’s second team – Richard McKenna; ladies’ first team – Donna Chester-O’Neill; men’s first team – Sam Howitt; leading ladies’ goalscorer – Eva Keyes (18); leading men’s goalscorer – Stuart Cunnington (44); Umpire of the season – Sally Pilgrim; most improved female – Jess Ball; most improved male – Matt Day; clubperson of the year – Matt and Sally Pilgrim.