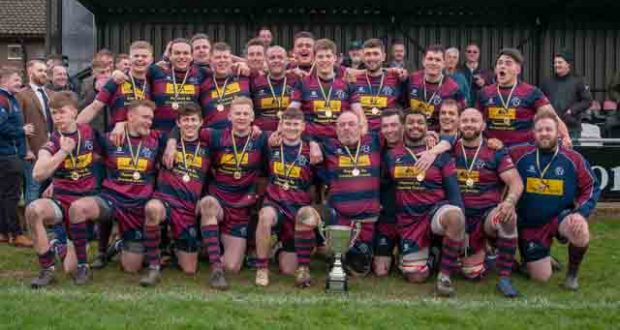 THAT WINNING FEELING: Spalding RFC kick off the defence of their RFU Midlands Senior Vase trophy with a derby against Boston on Saturday. They are pictured celebrating their win back in March 2020. Photo by ADRIAN SMITH

Spalding RFC made history on Saturday as they beat home favourites Dunstablians 26-15 to win the RFU Midlands Senior Vase for the first time in their existence.

In front of a crowd well in excess of 300, tries from John Barrett, Dan Adams, Gav Sharman and Ben Shields gave Town an incredible win over their Midlands Three East (South) rivals.

As an added bonus, the Elephants are now just one more win away from competing in a match at Twickenham after lifting their maiden divisional cup,

Within the opening few minutes Spalding were penalised for holding on in a tackle and then a further ten metres for not retreating, with Dunstablians’ full-back successfully kicking the penalty.

Town were on edge and a further offence near the halfway line, resulted in the penalty kick missing the posts in the wind.

But it looked like outside centre Jack Patrick would settle Spalding’s early nerves, as he sliced through Dunstablians’ defence – only to lose control of the ball as he touched down.

However, the referee was playing advantage and a yellow card was shown to a home player. The penalty was kicked to touch and a maul was established, driven forward and hooker, John Barrett was underneath for the opening try.

Conall Mason, taking the kicks in a difficult and swirling wind, saw his kick go wide.

Minutes later, Spalding were again penalised, holding on, but the penalty kick went wide. A further infringement by Town saw them caught offside and another kick sailed wide.

Town then started to motor, with forwards Ryan Chappell and Ash Piccaver showing strength and pace with their carries, which brought a penalty award.

Kicking to touch and with a good throw in by John Barrett, Ash Anker caught the ball and fed scrum-half Will Shields. Willis Ingleby then made a break at fly-half and offloaded Adams, who showed strength to reach the line.

With Mason’s conversion successful, Spalding had a nine-point lead.

One of Dunstablians strengths was in their scrums – but they had not taken into account the ability of props Pete Waudby and Luke Turner, aided by the experienced Harry Sharman at eight.

Chappell then made a good break out of defence but with the support slow to arrive, he was caught holding on in the tackle – but another home penalty kick failed.

With half time approaching, Dunstablians won a scrum penalty, but then failed to release at the next breakdown and half time whistle went.

With changes at the break, Spalding kicked off and after controlling possession for the opening minutes drew the first penalty against Dunstablians.

Ingleby kicked to touch and, with Anker winning clean ball, he retained possession setting up a driving maul.

Dunstablians were penalised for collapsing and Spalding repeated but their advance was halted.

However, with possession retained, Will Shields whipped the ball out to Ingleby, who in turn passed long to Mason, joining the attack out wide on the left.

An excellent pass then found left wing Gav Sharman and from 20 metres out his pace helped him evade the covering tackles for Town’s third try of the afternoon.

Spalding’s kicker Mason was now giving a masterclass to his opposite number, with a stunning conversion kick from just inside the touchline, establishing a 16-point lead with half an hour to play.

The visitors now looked dominant, but on one occasion Dunstablians escaped, kicked back over the line of defence. But Piccaver duel blocked a runner off the ball and received a yellow card.

The game was now swinging the home team’s way, as they spread the ball wide and stretched Spalding’s defence.

A high tackle saw the home team kick for touch. With a lineout won, their forwards were in control and battering the try line, forcing Town into a series of last ditch tackles before their reward came with a converted try.

Now nine points adrift with plenty of time left on the clock, the hosts were eyeing up a comeback.

But, with Piccaver back on, Ben Shields collected the ball 20 metres out and weaved his way inside and outside, leaving defenders standing and he was over in the corner.

Another outstanding conversion by Mason put the lead back up to 16 points with 12 minutes to play.

There was to be no plain sailing, though, with Harry Sharman’s high tackle seeing him yellow carded for much of the closing stages.

An offside penalty was soon given on Spalding’s five metre line, with the Dunstablians’ scrum-half darting in for an unconverted try to reduce Town’s lead.

That was to be the final scare, though, as they Elephants held firm to lift a trophy that theyy have long coveted.

Spalding were scheduled to be in derby action at Stamford this Saturday, but that fixture – and all Midlands rugby – is suspended until at least April 14.