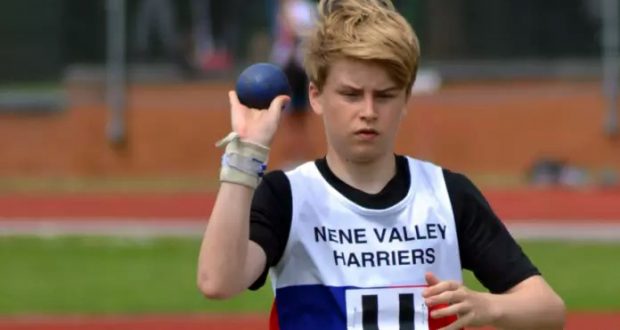 Nene Valley Harriers’ young track and field team enjoyed their day in the spotlight at Bedford in the finals of the Eastern Young Athletes League.

Having battled to qualify by finishing in the top six in the league, the athletes knew they’d be in for some tough competition against the region’s elite.

Despite finishing fifth out of the six teams in a closely fought contest, the day was a great success with several athletes enhancing their burgeoning reputations with strong showings.

The under-15 girls were the highest scoring age group, and despite finishing third, they were in contention for first place right up to the final event.

Olivia Mead and Ella Robinson pulled off a double 800m success, with Mead winning the A race in 2.26.8mins and Robinson going even quicker with a 2.26.5mins clocking in the B race.

Both athletes won by huge margins, with the second placed runners only halfway down the finishing straight when the Nene Valley double act crossed the line.

Francesca Fenwick and Millie Weller won the A and B high jump, and there was also success in the long jump with Josie Downer achieving the longest leap of the day.

Elizabeth Moorhouse scored maximum points in the B shot, too.

Nene Valley’s under-15 and under-17 boys also scored heavily, though there was only one win at under-15 level with Charlie Brook taking first place in the B javelin with a 37.81m throw.

Consistency was the name of the game, with Nene Valley finishing second in eight events in an age group where the level of completion was exceptionally high.

Aaron Hunt was one of the stars of the day, winning the under-17 1,500m as he ripped the field apart with a fine display of front running to finish in a time of 4.11.3mins.

Also on winning form was Joe Prince in the B 800m.

Donovan Capes had a great day, winning the under-13 long jump, shot and discus. His discus distance of 31.18m gave him victory by over five metres.

Elsewhere, Freddie Fitzpatrick won the B shot, and finished second in the B discus.

Ellie Piccaver was first over the line in the under-17 B 800m with a 2.28.3mins clocking, while Chelsea Bole had the best result of the day for the under-13 girls with a second place finish in the 1500m.

Team manager Russ Prosser said: “I’m very happy with all the athletes, it was clear to see they all gave everything on a cold and windy day.

“Another season and another final, I’m very proud of them all.”