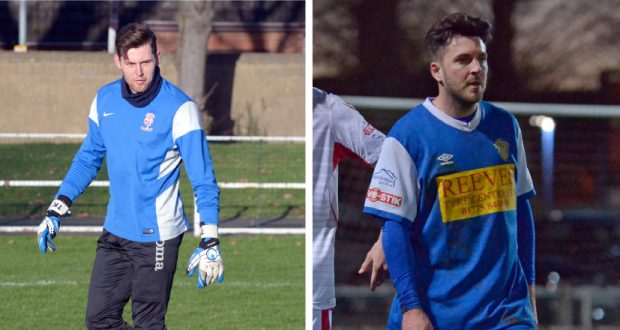 Dave Frecklington has paid tribute to two players that have departed Spalding United this week.

Striker Bradley Barraclough has left the Tulips after agreeing to terminate his contact by mutual consent, while keeper Richard Walton has returned to parent club Lincoln City after a successful loan spell.

Barraclough has been plagued by a foot injury that ruled him out of most of 2016 – and boss Frecklington has revealed that he approached the club about leaving, feeling he couldn’t contribute 100 per cent to the cause.

Walton stepped in superbly for injured number one Michael Duggan and leaves the Sir Halley after a very successful spell between the sticks.

“Both players leave with our very best wishes,” said Spalding supremo Frecklington. “It’s a shame to lose both of them.

“We’re disappointed that Brad has gone. He approached us and said that he didn’t want to be a burden and couldn’t give 100 per cent.

“He could easily have sat on what was a pretty tasty contract here, but that’s the kind of lad he is.

“His personal circumstances have changed and he wants to be closer to his girlfriend down south, but he’s also really struggling with his foot.

“It’s affecting him in everyday life and he really needs to get it sorted.

“As for Richard, he’s been brilliant. When Michael Duggan got injured we looked around and wondered how we could replace him.

“But Richard has stepped in superbly and has been a key man for us. He leaves with our best wishes and we couldn’t have been happier with how his loan spell went.”

Despite losing the pair, Frecklington added that he’s not actively looking to bring anybody else in – having recently signed striker Leon Mettam on loan from King’s Lynn Town and defender Kern

But the Spalding supremo also admitted that he’s always open to improving the squad, having loaned back Cenk Acar from Lincoln City.

He added: “I’m very happy with the group we’ve got and I’m not currently looking to bring anybody else in. But, as always, if somebody who would improve the squad becomes available, we’ll see what we can do.”