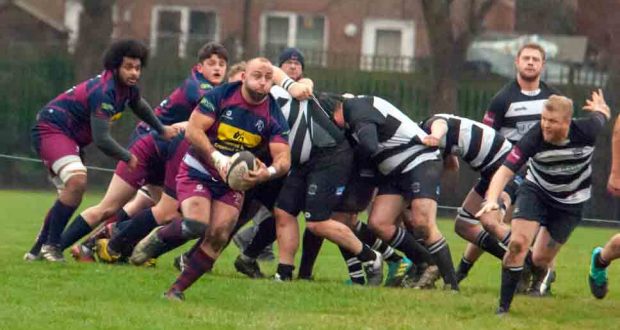 CONSOLATION SCORE: Harry Sharman (on ball) got Town's try in the final minute on Saturday. Photo by ADRIAN SMITH

In-form Spalding RFC came crashing back down to earth on Saturday as they were soundly beaten 29-5 by high-flying Oakham.

The Elephants fielded a largely settled side for the Midlands Three East (North) clash, with the only changes seeing Miguel Da Silva come in for Ash Anker, Charlie Johnson start at outside centre and Gav Sharman returning on the left wing.

Within the first few minutes it was evident that Oakham were a well-drilled team as they immediately had Spalding on the back foot.

Indeed, the visitors had to resort to a kick to touch from within their 22 to clear the danger. Oakham won their lineout and within a flash the ball was in the hands of their fly-half, Calum Crellin.

A planned move saw both their left wing and full back coming into the attack, creating a clear overlap and outside centre Johno Milnes took advantage of a big hole in Spalding’s defence and with a successful kick Oakham were seven points up.

On the ten-minute mark, the hosts kicked to touch from a penalty conceded.

The lineout was on Town’s five-metre line and the home team established a driving maul, which saw them go over the line for Oakham’s second try.

Spalding were not at the races, losing possession in contact and second best to the breakdown as they struggling to contain Oakham, who were now well on top.

To cap it all, Town seemed to be falling foul of the referee and some of his decisions, as illustrated by Ash Piccaver being penalised for kicking the ball when it had clear left the ruck.

Next, Ryan Chappell was yellow carded for not releasing in the tackle and from the scrum with their man advantage, Oakham were able to score out wide on the right wing.

With half-time approaching, the home team’s flanker deliberately knocked on and was yellow carded, giving them a scoring opportunity before half time for Spalding – but Willis Ingleby’s kick failed to find touch.

Town took the opportunity to regroup at the break and looked to implement their game plan rather than being dictated to by their hosts.

Soon after the restart Harry Cole took a stinger to his shoulder and was replaced off the bench by his younger brother, Will.

Spalding had stepped up their efforts, with the forwards Luke Turner, Jacob Greaves and Piccaver making big carries into Oakham’s defence, but the home team hit back as they applied pressure in the scrum.

An Oakham big kick to touch then saw lineout possession won and their fly-half again orchestrated another backs move to score down the left wing.

However, all the away players were convinced that the Oakham scorer was a metre short and had lost control of the ball.

Despite being some way behind, Spalding were now having the majority of territory and possession as they kept battling back.

But Oakham’s defence was rock solid as they defended in depth as one team, within their five-metre line. Captain Dan Adams crashed the ball up several times, but the gaps were not opening up.

Finally, after a series of pick and dives by Spalding, with valiant defence on the line by Oakham, Harry Sharman was able to touch down their only try of the day seconds before the final whistle.