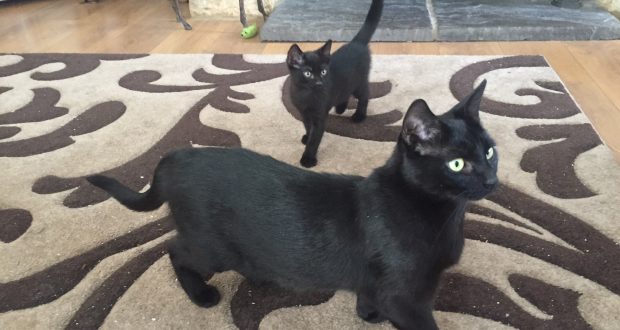 Everything has come up smelling of roses for Tulip – a black cat found injured in the doorway of the Voice offices.

The unlucky young black female was found cowering and looking badly injured outside the office in busy Winsover Road at the beginning of May.
A pool of blood on the road nearby suggested she may have been hit by a car.
The Voice team rushed her to Alder Vets, Bourne Road, where caring staff cleaned her up and treated her wounds.
An x-ray to scan for broken bones revealed that the cat, which was not microchipped, was heavily pregnant.
An appeal by the Voice on our Facebook page was unable to trace the cat’s owner and after recovering from her injuries at the surgery, she was taken home to have her kittens by veterinary nurse Zoe Reeve.
Zoe continued to care for the cat she named Tulip after she gave birth to three adorable black kittens – and now mum and babies have all found new homes with caring owners.
Tulip and one of the kittens (pictured), which has been named Worf, have been taken in by Voice production editor Tracey Sweetland’s mum Jane Crampton.
They are settling in well with Jane’s two other cats and enjoying lots of fuss and attention.
The other two kittens have also found loving homes with Donna and Andy Woodthorpe.
Zoe said: “This particular story had a happy ending but it is important for responsible cat owners to ensure their pets are microchipped so we can trace them in this kind of situation.
“We would also urge cat owners to have them neutered to prevent them becoming pregnant as it can be difficult to find homes for the kittens and rescue centres are often overwhelmed.”