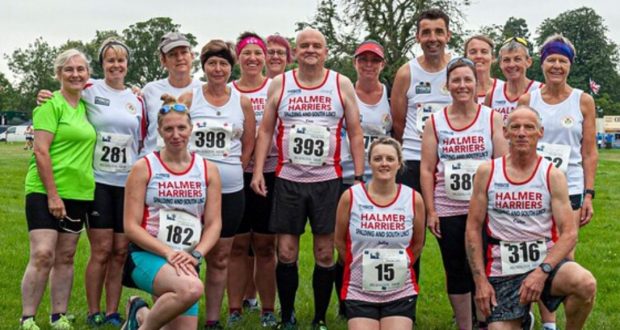 OUT IN FORCE: Members of Halmer Harriers at an event last year

Group keep on running through lockdown

The Halmer Harriers are continuing to meet up and be as sociable as possible despite a host of their events being cancelled – including this year’s hugely popular West Pinchbeck 10k.

Virtual relays and attempting to collectively run around the globe are among the initiatives being taken on by the Spalding running group.

To keep the competitive instinct going, the club organised some of its 120 members into relay teams who amassed as many miles as possible.

Team Kipchoge won the competition after amassing 2,372.83 miles in the first two months of the lockdown.

Now that competition’s finished others are being organised including collectively running enough miles to go around the globe.

The club’s vice chair Steve Tucker said: “The support throughout the club has been brilliant.

“Runners are desperate to keep in touch because we can’t run together and as well as the runs and keeping in touch online there’s even been a summer time Secret Santa.

“We’re even having non-members joining our running challenges which is great.

“Some of the runners have taken it upon themselves to meet up and go for runs while self-distancing but we’re a long way from competitive runs as yet.”

That sadly means that the club have had to cancel the West Pinchbeck 10K Road Race that was due to take place on September 27.

Calling the decision to cancel “difficult and reluctant” race director Colin Crump said: “Due to the COVID-19 pandemic and uncertainty surrounding the lifting of restrictions on public gatherings, many of the tasks required to run the event had to be put on hold.

“We now find ourselves in the position where we don’t know when these tasks could be restarted and lead times for some are beyond the event date.

“I know many of you will be disappointed to hear this news, but rest assured we will do our utmost to make next year’s event bigger and better.

“In the meantime, stay safe and healthy.

“We look forward to seeing you next year.”