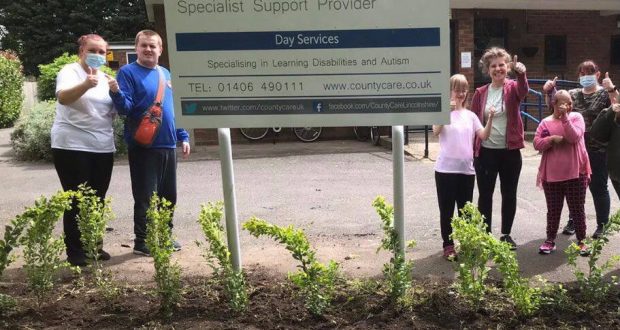 The now stolen trees were planted in May.

A group of adults with autism or a disability have been left gutted after trees they were looking after as part of their integration into the community were stolen.

The 12 at County Care’s Holbeach branch turned up to its Park Road centre on Wednesday (June 23) to find the bushes they’d planted in May and nurtured ever since had been dug up and taken during the night.

The company’s aim is to build the confidence of those with a disability or autism so they can live as independently as possible in the community.

Planting and maintaining the trees at the front of the property to improve the street was among the host of projects to help with the twelve’s integration into the community.

“Everyone is absolutely gutted,” said Carla Fuller, the manager of the Holbeach branch of County Care.

“It’s not even about the bushes or the cost of losing the trees.

“It’s about the time and effort the service users have put in planting and looking after them.

“They have taken so much pride in looking after them.

“It’s not long since we’ve finally been able to meet again after the lockdowns and during that time the bushes at the front of the property died.

“We spent all day planting the new bushes and there’s been so much hard work from everyone gone into them since as well.

“They’ve spent so many hours watering them and weeding them.

“Then they just come in one morning and the plants are completely gone, the roots and everything.”
County Care do have CCTV cameras which it is set to review.

Carla has appealed for anyone who may have information to come forward as they look to replace the bushes.

Anyone with information can contact Lincolnshire Police on the number 101 quoting the crime reference number 21000348568.