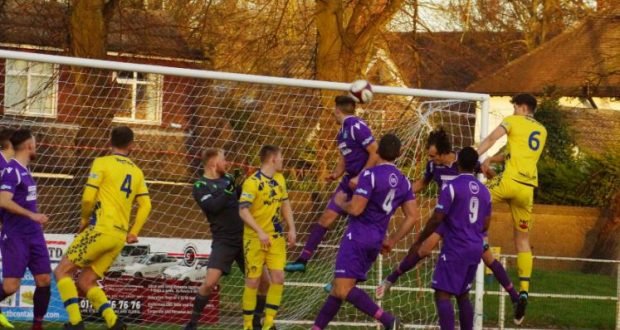 The Tulips remain unbeaten under the caretaker management team with a well deserved share of the BetVictor NPL South East division points with visiting Kidsgrove Athletic.

Despite the departure of Jenk Acar and George Zuerner to lower league Skegness Town in the days preceding the fixture, the Tulips had the desire and ability within their squad to give a performance of note against a strong Staffordshire side.

The game was evenly contested throughout and contained three superbly executed goals from open play.

The first came from the ever consistent Tulips midfielder Kegan Everington after 38 minutes with a sizzling volley from 25 yards, and the second, 12 minutes into the second period, from Kidsgrove substitute Kingsley Adu-Gyamfi who pounced on a missed clearance just outside the area to power the ball past goalkeeper Michael Duggan.

But parity was restored just two minutes later when Joel Brownhill connected with a James Hugo cross to give Kieran Harrison no chance.

The closing scoreline could have been much different with both side creating scoring opportunities. After just four minutes Kelvyn Brooks’ close range effort from a Brownhill assist was blocked and cleared from the visitors area. Three corners on the bounce failed to bring reward.

At the other end Rhys Thompson shot inches wide of the target while Duggan produced a great blocking save to keep out a blockbuster from ace striker Ant Malbon.

However, the pick of the attacks were coming from the Tulips. A neat passing sequence down the left side ended with Everington’s shot being blocked.

A free kick by Brownhill was clutched just beneath the crossbar by keeper Harrison and captain Ben Greenwood headed fractionally wide.

The lead when it arrived was well deserved following the pattern of play.

The Tulips were denied a quick second goal with Scott Floyd’s effort ruled out by an assistant referee’s raised flag for offside.

Early second half play was largely controlled by the visitors.

Duggan pulled off a super diving save at a post following a corner, while Malbon will be kicking himself for ballooning the ball high over the bar with only Duggan to beat.

A couple of uncharacteristic errors by centre half Ben Richards presented Kidsgrove their equaliser with substitute Adu-Gyamfi pouncing on the loose ball to fire past Duggan.

Six minutes later the Tulips were chasing the game. Richards tripped Wiggins-Thomas in the area and the player stepped up to comfortably convert the resulting penalty. The problem had started with a mix-up between Owen Betts and Greenwood.

However, it took the Tulips just five minutes to level the scores.

Everingtron and Hugo combined sweetly down the left side and Brownhill rounded on Hugo’s final cross to hit the ball first time past a static Harrison in the Kidsgrove goal.