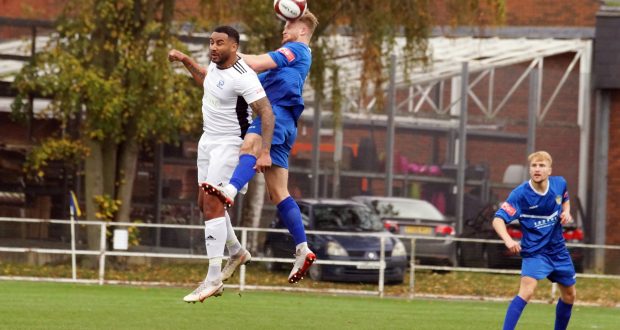 BIG BREAK: Action from Spalding United’s match at Worksop in October, shortly before the season was paused. Photo by MARK GOODALE.

The area’s top non-league football clubs have been handed a boost with the announcement that they can claim government grant money.

Football clubs at steps three to six of the non-league pyramid, which includes Spalding United, Holbeach United and Pinchbeck United, can apply for the grants to keep them going during the latest lockdown.

Up to £10million can be claimed by the 850 clubs who can bid as part of a £300m Sports Winter Survival Package.The most a step four club like Spalding United can claim is £15,000 while clubs at step five, such as Pinchbeck and Holbeach, can claim £10,500.

There are restrictions on what the money can be used for. It can be used for paying off bills or debts, essential maintenance and creating COVID-19 compliance measures.

Clubs will need to use the funds by March 31 and submit evidence of how has been used by May 30, the Football Foundation says.

Sports Minister Nigel Huddleston said: “We promised to support sports and target help to where it’s most needed. We continue to deliver on that with further support for National League football clubs.

“The National League has already benefited from the Government support schemes through a £10million Government-brokered cash partnership with the National Lottery, and there will be more support for the bigger clubs on the way.

“This £10million grant for lower league clubs in steps 3-6 will act as a lifeline for around 850 clubs in towns and cities across England, and help these clubs through this difficult period until we can get fans back in safely.”

“As the sport and physical activity sector continues to navigate trying times, this package of government support is vitally important in ensuring that clubs, sports and leagues who are reliant on revenue from spectators can continue to stay afloat.

“With thanks to Sport England for their significant work managing the scheme, the independent Board continues to work at speed while prioritising those with most pressing need for support, and we anticipate confirming further recipients in the coming weeks.”

While Pinchbeck United last played in December in the United Counties League league, Holbeach United and Pitching In Northern Premier Division side Spalding United haven’t played a game since November with the leagues likely to be declared null and void.

They’re now awaiting the results of an FA survey into how to proceed once non-league football can be played again in line with government guidelines.

“The FA would like to thank the clubs for submitting their views and the time taken in providing responses at what we appreciate is an incredibly challenging time for everyone.

“The FA’s Alliance & Leagues Committees now have a large amount of data and information to consider before determining a proposed way forward. Ultimately any proposal made by the committees will be put to FA Council for consideration. FA Council will then make any final decision on a way forward.

“The Alliance and Leagues Committees recognise the desire for clubs to be updated whilst these issues are being carefully considered.

“Therefore, both committees commit to providing updates to leagues and clubs as the process progresses; and remain mindful of the difficulties faced by clubs at present.”

When asked last month all the local clubs felt that null and voiding the season was inevitable.

Pinchbeck manager Lewis Thorogood called for an end of season local competition to be organised if it was safe to do so while Spalding United CEO Leigh Porter said they had asked the FA for more clarity over some of the options being offered.