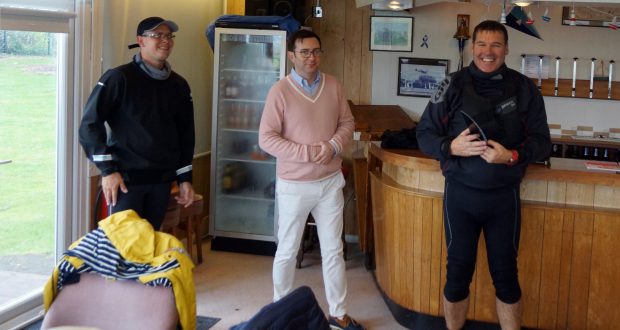 Although the club has held an open meet for many years, the passing of former club commodore and treasurer Richard Thacker has seen them rename it in his memory.

And, with two wins from the three races on the day, it was Girton’s Paul Burton who took overall glory.

Some 15 boats took to the start of the first race of the day, but with the wind not as strong as forecast, an upriver start was chosen to buoy three, then back to one for three laps.

As the lead boats of Burton, van Haren and Scourfield headed towards the club house to complete their first lap, it became apparent that three laps would be too long, so the course was reduced to two.

Burton would hold onto his lead until the end, with van Haren crossing the line second and Mark Holland third. Race winner Burton maintained the win after handicaps were applied, with Corke jumping up to second and Gail Follington up to third.

With the wind having freshened slightly, the course was kept to two laps for race two.

The fleet was now down to 13 and, although Burton took the early lead, it was soon lost to van Haren, followed by Agar.

Corke found himself back in eighth, but was sailing his own race.

On the water, van Haren maintained his lead throughout the race, crossing the line ahead of Burton second and then Prior/Bell third.

This time, Corke would take the win from a ninth place finish on handicap, with Burton second and Cox third.

Race three, which was aided by a healthy wind, saw Agar take the early lead from Burton, then Cox, Prior/Bell and North.

However, Burton took the lead as they approached the windward mark and crossed the line first followed by Agar and Prior/Bell. The only change after handicap saw Corke take third.

That was enough to give Burton overall glory.