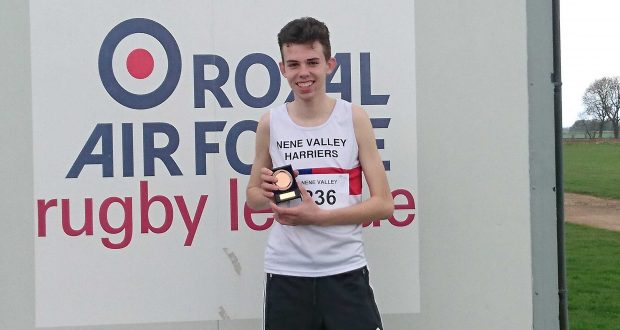 With two of the four campaign fixtures completed, Nene Valley are sitting in second position behind Derby AC.

The senior men’s race was a triumph for Peterborough AC, as they won the team event with Nene Valley also faring well, finishing fourth out of 22 clubs.

In an impressive display of front running, the Stamford based speedster galloped round the testing 10k course in a time of 30.10mins, giving him a victory margin of 20 seconds.

Peterborough AC were led home by Ben Heron who finished sixth in 31.39mins.

Five runners score in the senior men’s race, and Heron received excellent support from Steve Robinson in ninth place, and Shaun Walton, Phil Martin and James Whitehead who all made it into the top 20.

Peterborough AC are now placed second in the team standings.

The Harriers had several key runners absent at the regional schools cross country, but the strength in depth at the club stood them in good stead.

The under-15 girls just missed out on emulating the under-17s, finishing a close second to Rushcliffe AC.

Flo Brill in fourth, sixth-placed Ella Robinson and Katie Tasker, who finished 11th, were the scorers for Nene Valley.

The Harriers were the sixth team, while Peterborough AC finished 16th.

Meanwhile, Nene Valley’s under-13 boys were runners up to Derby AC, with Kai Chilvers running to a fine third place.

Chilvers was ably supported by Jacob Bush in ninth, along with 13th and 14th placed Alex Roberts and Joseph Rendell.

Aaron Hunt came in seventh for Nene Valley in the under-17 race, and Callum Dalliday’s tenth place assisted by Archie Rainbow in 16th helped the club finish as the third team.

The Nene Valley under-15s finished as the sixth team with Harvey Hancock in 17th position.

The under-11s were also the ninth club, and were led home by 36th-placed Noah Fell.