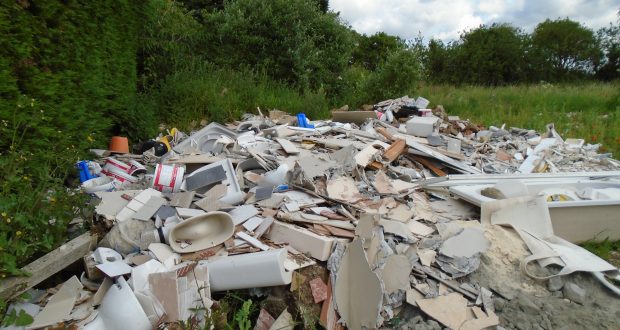 One of the illegal dumps.

A businessman has been given an 18-week suspended sentence for storing and burning waste illegally at a site in Gedney Dyke, despite repeated warnings from the Environment Agency.

Peter Higgins, 73, the owner of PJH Bathrooms, Kitchens and Tiles Ltd, based at Yew Lodge, Hallgate, Gedney Dyke, stored waste on ground next to the company showroom without a permit for over two years.

He was also responsible for lighting fires that released polluting chemicals into the atmosphere and caused a nuisance.

Lincoln Magistrates’ Court heard how on one occasion, Environment Agency officers investigating reports of thick black smoke at the site found the remains of items unsuitable for burning, including a chest freezer.

Environment Agency prosecutor Sarah Dunne told the court that Environment Officers had made every effort to support Mr Higgins, providing advice, writing letters and giving both formal and informal warnings over more than two years.

Mrs Dunne explained that they had visited him at least six times and gave him many chances to become compliant. Despite their efforts, Higgins continued his illegal activities.

“You had lots of opportunities to work with the Environment Agency but you treated them with contempt when they came to give you advice.

“You have had two years to work with the agency but you have taken an arrogant attitude to the officers. You have single-handedly not protected the environment.”

Environment Officer Jamie Holloway said: “Storing and burning waste in this way saved the cost of legal disposal and put the environment at real risk. Mr Higgins was able to operate at a commercial advantage and undermine his lawful competitors.

“We welcome this sentence which sends a powerful message to anyone in Mr Higgins’s position that waste crime will not pay.”

In addition to the suspended sentence, he had to pay court costs and a victim surcharge totalling £6,787.