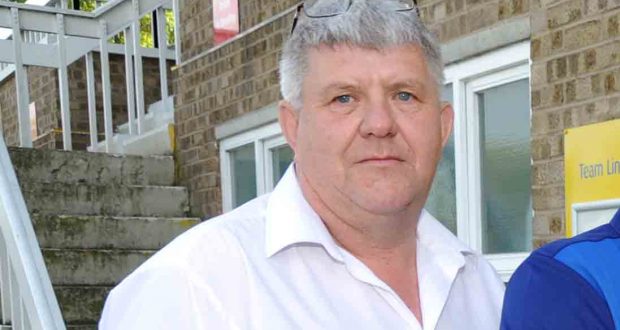 MAN WITH A PLAN: Andy Gay is in no rush to appoint a new boss.

Gay: Spalding United in no rush to find boss after Thorogood’s impressive start

Spalding United chairman Andy Gay admits that he is happy to move forward with Lewis Thorogood as caretaker manager.

The Tulips are without a permanent boss following the resignation of Matt Easton last week, but Saturday’s 4-1 win at Worksop Town was overseen by former assistant Thorogood.

Although Gay concedes that the club is open to discussions with any prospective new bosses, he says that they aren’t overly concerned with their current managerial situation despite the well-documented financial issues the club has off the pitch.

“Of course we’d talk to a manager if he sought us out,” said the Tulips’ chairman. “But we have to be realistic about things.

“The financial situation we find ourselves in means that we can’t really sit down and plan a proper budget with anybody. It wouldn’t really be right to talk to a possible manager and not be able to give him a working budget.

“With that in mind, we’re happy to go with Lewis as a caretaker for the time being and keep the other staff around him.

“In the same breath, it’s also true that Lewis led the side to a great win last weekend. If he keeps that going and the club has a strong run of results in the coming weeks, he’s got every chance of securing the role himself.

“Realistically, we’re not far off the 30-point mark that was enough to keep us up last year. If we can get there by the end of the year, we can plan for another season at this level and work towards putting things right behind the scenes.”

Another problem that could broadside the Tulips is the possibility of a mass exodus of players in the wake of Easton’s exit and financial issues that have led to complications paying their wages.

Taron Hare has already left the club to join Barton Town, but Gay insists that the club haven’t received any other approaches for their players.

He is expecting all of them to be present for Saturday’s home clash with Kidsgrove Athletic on Saturday (3pm) as ninth-placed Spalding bid to close the gap on the top six.

Saturday is ‘Christmas Jumper Day’ at the Sir Halley Stewart Playing Field, with the club asking fans to turn up in their best festive knitware (there will be a prize for the best jumper).

Immediately after the game there will be live entertainment with a female vocalist in the clubroom and later on a race night is planned, with everyone welcome.