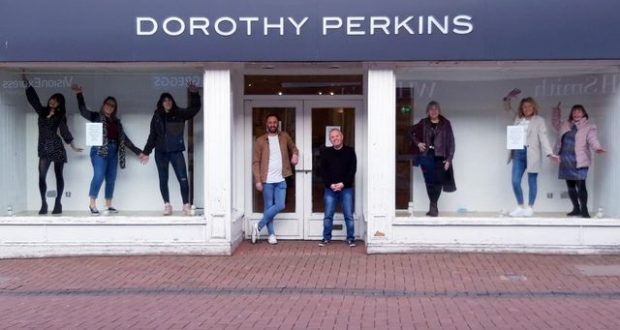 Gambling company Merkur Slots has applied for a licence to open a centre in Spalding’s former Dorothy Perkins store.

Members of South Holland District Council’s licensing panel will decide whether or not the company can have a bingo premises licence for the site on Hall Place.
Under the licence gamblers can stake a maximum of £2 for a top prize of £500 in fruit machines.
The company had applied for a change of use for the empty shop earlier this year and was refused by the planning committee.
Merkur is currently appealing the decision and members of the licensing panel are told to treat the licence as a separate issue.
The company wants to operate a 24/7 business and the move has been met by opposition in the town.
There is no recommendation from officers either way within the agenda for the meeting.
“In making a decision in respect of an application under this part, a licensing authority shall not have regard to whether or not a proposal by the applicant is likely to be permitted in accordance with the law relating to planning or building,” says the report.
The applicant states within the application that staff are aware of ‘the importance of social responsibility; and are trained to advise customers on gambling responsibly.
“Whilst the premises may be near or in an area of relative deprivation, Merkur Slots takes the view that individual customers must be treated holistically,” says the application.
It quotes crime rates in South Holland last year as being lower than the average for the Lincolnshire force area. In April of this year there were 212 crimes reported within half a mile of the site and two were on Hall Place itself.
There have been no police objections to the licence application.
South Holland and The Deepings MP Sir John Hayes is among objectors.
He says 24-hour opening is ‘unwelcome’ and could lead to increased anti-social behaviour.
“I have received a large number of complaints,” says a letter to the panel.
Coun Gary Taylor also objects on behalf of staff and management at The Red Lion Hotel.
Staff will ‘regularly patrol the gaming floor to supervise and interact with customers,’ the report adds.
Staff will also be monitoring outside the premises and surrounding area and take ‘appropriate steps’ within reason to the minimise the risks.
“Staff are aware of the importance of social responsibility,” says the report.