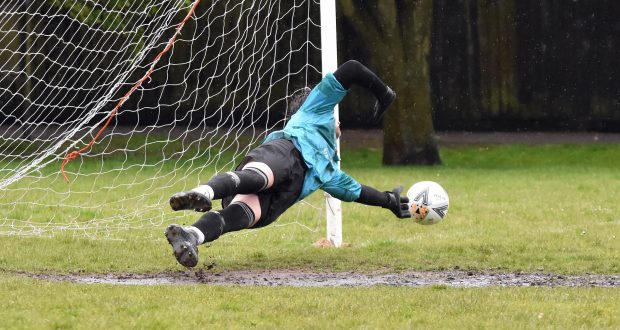 The Crowland keeper saves the penalty. All photos by JAKE WHITELEY.

First-half goals from Danny Firth and Harry Grigas looked to have put Crowland 2-0 up and on their way to victory at London Road.

But Callum Madigan headed home before the break for Sutton, who went on to win the all-South Holland showdown thanks to second-half goals from Matt Eaton and Ryan Alexander.

Also beaten were Crowland’s Reserves, who suffered a 10-0 home humbling against Leverington Sports as Harley Hollis and Billy Barnes both bagged trebles.

Long Sutton Reserves went down 6-3 at FC Peterborough Reserves in the Peterborough Junior Cup, despite goals from Matt Cawthorn (2) and Lewis Machin.

However, Sutton Bridge United did manage a victory in the Peterborough Minor Cup as they saw off hosts Ramsey Town Reserves 4-2.