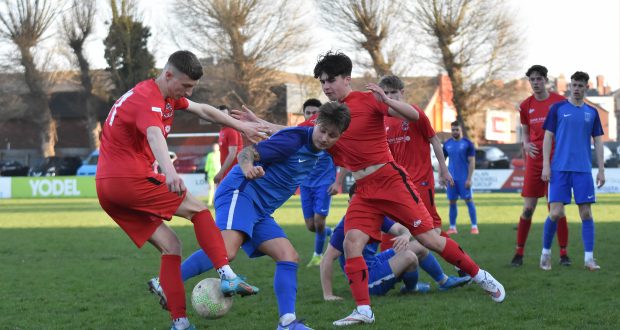 It was a third straight narrow defeat for Pinchbeck who are now three points from safety after Selston’s surprise point against league leaders Long Eaton United in Saturday’s 1-1 draw.

“It was a game of very few chances and we neutralised them quite well,” said Thorogood. “I am disappointed as it was a game I felt we would get something from.

“They’re a good footballing side but the pitch at the Sir Halley was always likely to be a leveller.

“They still tried to play and you have to give them credit for that.

“They had a goal disallowed and we created three good chances but then you have to keep your concentration levels.

“If you don’t or you make one poor decision then it costs you.”

Thorogood said Spruce’s strike mid-way through the second half was the only thing that seperated the sides and lamented his side not getting a tackle in or committing a foul to stop the move.

It meant another single goal defeat for the Knights, though the manager said that can be taken as a positive too.

“When you look at some of the thumpings being handed out to sides around us, we’re doing well against sides in and around mid-table.

“Credit to Heather too, they took their chance when it came and that’s why they’re fourth.”
Pinchbeck are without a game this weekend and instead face Loughborough Students on Tuesday night.

Thorogood says it might be a good time to make the trip to the Loughborough University Stadium with the Students playing for a place at Wembley Stadium on Saturday as they visit Littlehampton FC in the semi-final of the FA Vase.

“I don’t really know what to expect and how they look at it could depend on how they do in what is an absolutely massive game for them on Saturday,” he said. “They’ve got a long away trip and they could end up going to extra-time and penalties.

“They’re going to put all of their effort and energy into getting to a Wembley final.

“Then, if they win, will they be wanting to risk getting injured and missing such against a side like us?

“Maybe the best time to play them is 48 hours after an FA Vase semi-final, but either way, we know they have a lot of talent and depth.

“We’ve got to go there and play well and see what we can do.

“At our place we only lost 2-0 and that was with a host of enforced changes so we know we can challenge them and cause them problems.”