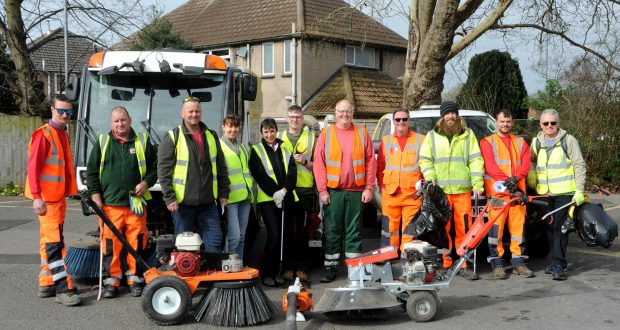 Muck-busters! The South Holland District Council Pride Team along with Flytipping Watch and volunteers turn out in force for the launch of the Great British Spring Clean.

Full of the joys of spring… cleaning

The national initiative to clean up Britain has taken off in a big way in South Holland, with teams taking to the streets on Tuesday morning and two major clean-up groups joining forces in Spalding.

“We’re just trying to make the place better, that’s what it comes down to,” said Mark Douglass, who at the end of last year formed three district clean-up groups under the name Flytipping Watch.

Mark’s team of volunteers was backed up by the South Holland District Council Pride team, which has recently expanded due to a dramatic increase in funding. Mark said the partnership between the two is “really positive”.

Across two, two-hour shifts on Tuesday, the team tackled rubbish on the roads, paths and even around the Spalding Water Tower. At their disposal the teams had a road-sweeper with jet washer, the “Glutton” street vacuum, weed rippers, sweepers, pickers, leaf blowers and path cleaners.

The day of action was the first of three a week that will run for the next five weeks – and you can choose where the teams go, even if you don’t want to get involved yourself.

Tony Crofts from South Holland District Council said the public is in control of where the Pride team goes, and can register at www.keepbritaintidy.org to suggest action areas. “You can nominate a place as well as showing up yourself. They get to choose where we go,” he said.

The national scheme, organised by charity Keep Britain Tidy, runs until April 23 and groups are taking part across South Holland.

The joint group of SHDC and Flytipping Watch have mapped out their locations for the next few weeks, details of which can be found here: www.sholland.gov.uk/keep-britain-tidy

lIf you are taking part and organising a litter pick over the next few weeks or forming
a group to tidy up your neighbourhood, get in touch at news@spaldingvoice.co.uk with pictures of your efforts and we’ll celebrate your work in print.