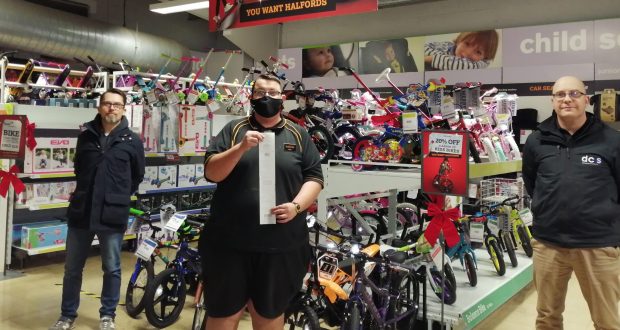 Free bikes are ready for a festive delivery

Christmas will be extra special for a group of South Holland children who don’t know it yet.

They will be unwrapping a brand new bike, complete with helmet and lock, thanks to the efforts of a local kind-hearted businessmen.

Daniel Lunn and John Barton have been renovating donated bicycles and giving them to children who would otherwise go without.

But for Christmas they launched a crowd funding bid to buy new bikes as special presents.

The appeal raised £400 and Spalding’s branch of Halfords stepped forward to offer discounts so the money stretched far enough for bikes, helmets and locks along with a year’s free cycle care if any help is needed.

“We had some great support and we really wanted to give new bikes for Christmas,” said Mr Lunn.

Along with Mr Barton, of DCS Security in Gosberton, they have renovated and donated 30 bikes to children in the Spalding area.

A sales manager, Mr Lunn has been working from home since lockdown and realised many people would not be in a position to give bikes to their children.

A Facebook page, Free Bikes for Kids, has been set up to explain more about the initiative and how to apply.

Mr Lunn and Mr Barton are usually donated bikes which need a bit of work before they can be re-homed.

The new bikes initiative will run for Christmas and anyone who would like to apply for one can get in touch via the Facebook page.

There will be a total of five because local resident Martin Halifax donated a new bike to the collection.

“We are asking people to let us know why – we don’t need the ins and outs of their personal situation, but just why they need a new bike,” said Mr Lunn.

He has been working from home and said he had more time so he decided to spend it working on bikes which could be given away.

“We are not asking people for bikes. But if people want to help they can reciprocate the initiative and pass on a bike to someone else who needs it,” said Mr Lunn.