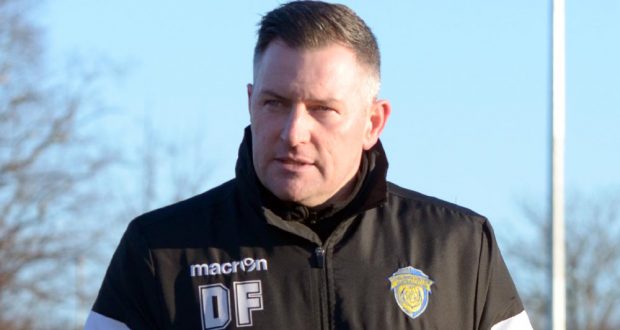 The Tulips travel to Staffordshire with a point to prove, having lost 1-0 to Leek at the Sir Halley and having failed to beat any of their promotion rivals so far this season.

Leek are seventh, ten points off the second-placed Tulips with a game in hand, but are seen as serious play-off contenders.

Frecklington feels that his in-form side, who have won eight and drawn one of their last 11 matches, still have an outside chance of winning the Evo-Stik NPL First Division South title – and wants them to send a message to their rivals at Harrison Park (3pm).

“We go there with a score to settle,” admitted the Spalding supremo. “Have no doubt about it, Saturday is our biggest game of the season.

“We’ve yet to beat a team that is in and around us at the top this season and Leek got one over us earlier in the season.

“The pitch there will suit us and we’re travelling full of confidence.

“It’s the first of a few really big games for us in the run in, including away games at Shaw Lane, Witton Albion and Rushden and Diamonds.

“If we want to win the title – and I believe we still have an outside chance – we need to be winning the big games.”

Frecklington feels that his two recent additions, striker Leon Mettam from King’s Lynn Town and defender Kern Miller from Stamford, will give his side an extra edge in the run-in.

The former Lincoln United chief admits that he couldn’t have imagined having such a strong squad available in his first season at the club – and accepts that his team is way ahead of schedule with reference to the three-year plan he unveiled last summer.

“We’ve got so much quality,” added the Spalding boss. “I couldn’t have dreamed of having this squad in my first season here.

“We recruited well in the summer and have only added quality. The 14 or 15 we have here is so strong and are a close-knit bunch.

“I’m a big believer in keeping things fresh – and adding Kern and Leon has given us that something extra for the run-in.

“I’d have taken being tenth and six points off the play-offs in year one. But to have been in the top three all season really has exceeded expectations. We now need to make sure we maximise our potential and achieve something.”