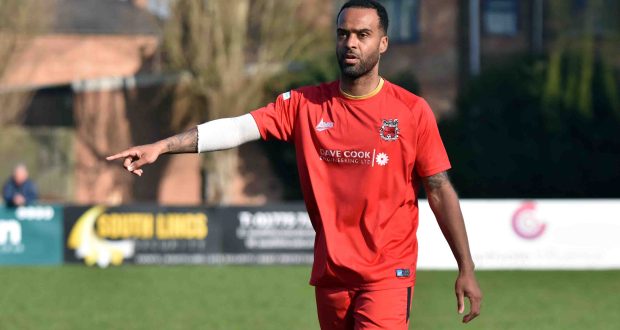 Two quick-fire goals early in the second half sentenced Pinchbeck United to a 2-0 defeat at Loughborough Students on Tuesday night.

The Knights remain in the Uhlsport UCL Premier Division North drop zone after strikes from Anthony Steven Lynn (50) and Theo Sackey (52) at the Loughborough University.

It was always the toughest game of Pinchbeck’s run-in and the loss keeps them three points from safety with four games to play.

Boss Lewis Thorogood was encouraged by the performance of his side, who hit the post through Spencer Weir-Daley in the first half and saw a huge penalty shout against Krisztian Gagyi waved away in the second half.

However, he was disappointed that his side started the second period slowly after such an impressive first 45 minutes.

“We perhaps could have gone in 1-0 up,” said Thorogood. “If Spencer’s shot is a few centimetres the other way, he scores.

“I don’t want to mention our penalty appeal too much, but I have to admit that was a clear one for me. Sadly, the referee didn’t want to make a big decision.

“Loughborough are as close to a professional outfit as you’ll see at this level and their near the top for that reason.

“They’ve just been to the FA Vase semi-final and it shows. Once they went 2-0 up they used their massive pitch and starved us of the ball.

“Some sides have lost heavily here, but I thought we huffed and puffed and gave a good account of ourselves.”

The Knights now have four huge games left to beat the drop, starting with Quorn at home on Saturday (3pm).

Thorogood feels all of the remaining fixtures are “winnable” and described them as “cup finals”.