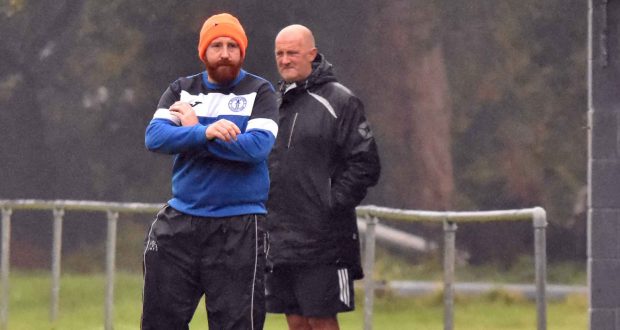 Co-boss Bobby Patterson toasted a job well done as Moulton Harrox made it six wins on the spin with a routine 5-0 win at Stamford Lions on Saturday.

It’s six clean sheets on the bounce for keeper Ant Murphy, while Moulton are now nine points off second-placed Stilton United in the ChromaSport PDFL Premier Division with two games in hand.

Next up for Patterson and joint chief Tim Cole is a derby date at rock-bottom Long Sutton Athletic on Saturday (2pm).

“We were expected to win and that can be tough,” said Patterson. “But we effectively killed the game with three goals in the first half.

“Josh looks back to his best. He knows he’d not been up to his usual standards earlier in the season, but he scored two goals in the first half that are typical of him.

“We took our foot off the gas a bit after going 3-0 up, so we just asked the lads to up their game after the break and two more goals came.

“It’s difficult when the game is already won, but they did well. I was pleased for Harry to get his goal, he’s worked hard since joining and deserved that.

“As a defender myself, I’m also very proud of our record of six clean sheets in a row.

“We’re all looking forward to going to Sutton now. They’re struggling this season but will be up for the game I’m sure.”

Moulton have also learned their fate in the semi-finals of the Lincs FA Junior Cup, with a trip to Grantham Town FC Academy on February 5 (1.30pm) their reward for beating Pointon 2-0 in the last round.

Patterson expects the tie with the youthful side to be a “clash of styles”.