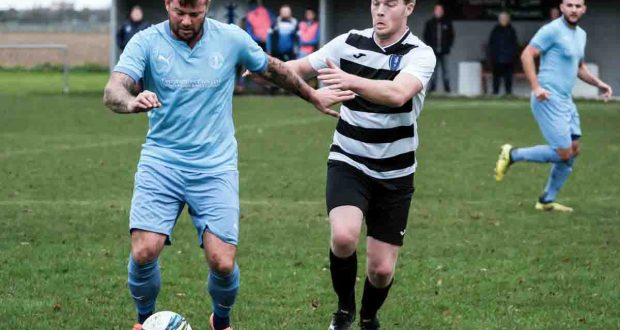 A stunning strike from Josh Ford helped fire Moulton Harrox into the last four of the Lincs FA Junior Cup on Saturday as they defeated hosts Pointon 2-0.

Ford, who has scored some sensational goals over the years, pulled one right out of the top drawer when he fired home a free-kick from distance in the first half.

The striker then raced through and squared for Declan Earth to clinch Moulton’s place in the semi-finals ten minutes from time.

Keeper Ant Murphy was also on-song at the other end and now boasts five clean sheets on the spin.

With the draw due today, co-boss Bobby Patterson doesn’t care who Harrox pull out of the hat – as he’s got total confidence in them.

“Given the weather on Saturday, we didn’t know if the game would be on,” admitted Patterson. “When we got there, it was clear that conditions were going to be very tough.

“The pitch very quickly turned into a bog and was something of a leveller.

“But we went there determined to reach the semi-finals – and the lads got the job done.

“Josh Ford’s goal was an absolute screamer, it must have been 30 yards out.

“He’s had a tough time lately, so I was delighted for him. You could see he puffed his chest out a bit after the goal, too.

“I felt that we were always in control, but they had some tricky and fast wingers that meant they always had a chance. But Josh ran through and put it on a plate for Dec, which was great to see.

“It doesn’t matter who we get next, I’m confident that the lads will do the business.”

Moulton are back in ChromaSport PDFL Premier Division action at struggling Stamford Lions on Saturday (2pm).