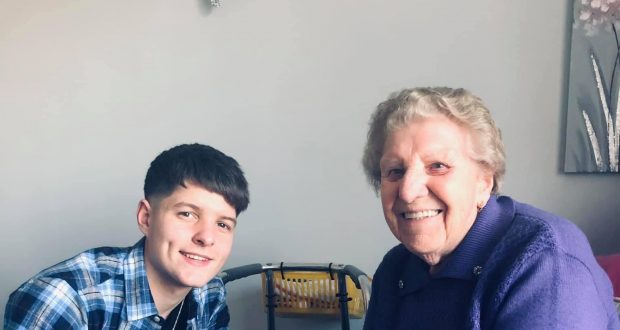 A Spalding footballer who is soon off to play the sport in America is running throughout February to support his 89-year-old great nan who has supported him so many times on the sidelines.

Sam Bayly (18), of Spalding, is running 5K every day to raise money for The Alzheimer’s Society, a condition Maxine Andrews suffers with.

Sam hasn’t been able to see her during the lockdown and in July is flying to Florida to take up a two-year football scholarship, so felt the charity effort was a great way to feel closer to her.

“She’s been my rock from the start and has always been everywhere to see me,” said Sam who is currently in the Bourne Town squad while on loan from Stamford and also a scholar with Grantham Town.

“Like my whole family, she’s always been out there in the cold, pushing her zimmer frame along and supporting me.

“I just wanted to do something to support her and particularly with her health surrounding Alzheimer’s.

“It’s difficult for her as she gets older, but she’s still very much herself.”

Sam’s moved into his girlfriend’s house in Weston for lockdown and has been completing most of his runs in and around the village.

He had hoped to raise but £250 but has already earned over three times that number for the charity.

And the charity has already thanked him for his efforts including sending out a top for his runs as well as a medal.

“I can’t wait to be able to wake up in a morning and think that I don’t have to go for a run that day,” he laughs. “But it has been good and during lockdown it’s got me doing something.”

Sam and friend Ridley Braid are both heading to do the scholarship at the Melbourne campus of Eastern Florida State College at the end of July.

“I’m really looking forward to it,” said Sam who plays as a centre forward.

“I’m going there and the main thing is to just enjoy it.

“I want to play football and the aim really is to earn an income from it in some way.

“There’s the possibility of the MLS (Major League Soccer, the top flight of football in America that utilises a draft system for young players) but just to be in any league that’s professional would be a great start.”

Mum Vicky Fovargue said: “He hasn’t been able to see his great nan throughout lockdown and felt this would be a good way to feel close to her.

You can donate to Sam here.